"I'll be high up there on the team-sheet!"

Gary Neville was probably more worried if he would make Roy Keane's Manchester United 'Greatest Premier League XI' than whether his old club could get their first win in four league matches, against Brentford.

Sky Sports may have lined up this task for Keane as Brentford are comfortably safe and United's Champions League qualification 'race' was all but run. As it turned out, United beat Thomas Frank's side 3-0 in a Monday evening stroll.

END_OF_DOCUMENT_TOKEN_TO_BE_REPLACED

Once that game was over, and both Keane and Jamie Carragher had their say on United's future, it was time for Keane to explain his XI. "I've told you before," he said before they kicked off, "I don't like doing this."

The criteria was Keane picking a greatest XI out of all the Manchester United players that featured for the club in the Premier League era [1992 to present].

The former United captain was given a choice of top players in 11 positions and had top pick from that. In goal, Peter Schmeichel got the nod and Keane joked their hotel hallway scrap, back when they were both in the side, ended as a draw.

END_OF_DOCUMENT_TOKEN_TO_BE_REPLACED

Gary Neville and Denis Irwin were easy full-back choices, while Jaap Stam was automatic at centre-back.

The Corkman opted for Gary Pallister - over the likes of Rio Ferdinand, Steve Bruce and Nemanja Vidic - and went for Bryan Robson in centre midfield as, "I'm certainly not going to pick myself."

Then for the big shocker - Keane's centre midfield choice, ahead of the likes of Paul Scholes, Michael Carrick and Nicky Butt. 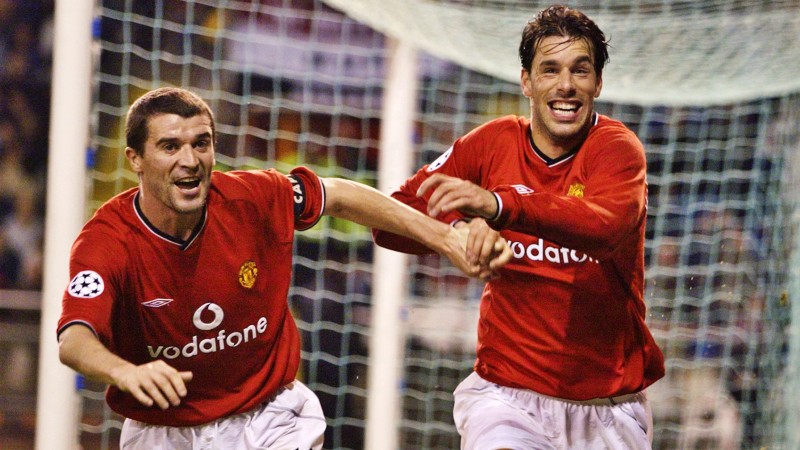 The man Roy Keane chose to place alongside Bryan Robson in the centre midfield of his Greatest Premier League XI was a man he admitted may have 'tarnished his United reputation' by joining Liverpool.

"This one may cause some debate, but I'm going to go for Paul Ince.

"He was a very, very good player... people talk about him giving himself the nickname of 'The Guv'nor', but that was just banter."

One the left and right wings, Keane briefly talked up Lee Sharpe but it was a simple enough choice again - Ryan Giggs and David Beckham. "Where do you want to start?" Keane reflected of Beckham. "You could get you an assist, a goal, score a set-piece, get up and down the pitch."

The likes of Ruud van Nistelrooy, Ole Gunnar Solskjaer and Dwight Yorke all got mentions, but missed out on selection. "The lads I'm leaving out... I am upsetting a few here, and I'm upsetting myself!

Rounding out Keane's XI, up front, were Cristiano Ronaldo and Wayne Rooney. "For all his off the field stuff," Keane said of Ronaldo, "he was never distracted by that stuff."

Here is the team Keane selected with the surprise picks, in our opinion, in bold.