This could well be the club's biggest summer purchase.

When the current season ends, Declan Rice will still have two seasons left on his West Ham United contract. The Hammers also have an option to extend the midfielder's contract for an additional season, which would take him up to July 2025.

As we all know at this stage, though, there are very few contracted players in football that are not immovable. Temptations, opportunities and cash are never too far away. West Ham are out of the Champions League mix for next season, so Rice may be keen to stretch his legs, and talents, with a club chasing silverware or competing with the best in Europe.

END_OF_DOCUMENT_TOKEN_TO_BE_REPLACED

He may also fancy the challenge of reviving the fortunes of Manchester United.

United are all but out of the Champions League running, too, but Erik ten Hag is coming in and he will be given backing [ie: MONEY] to revamp an ailing, listless squad. Several big, and not so big, names will be heading through the 'Exit' door, while ten Hag will be looking to get five or six new faces in.

United have long looked at Rice as a player they can build a midfield around, and there are encouraging reports, for them, about there being a path being clear to sign him. 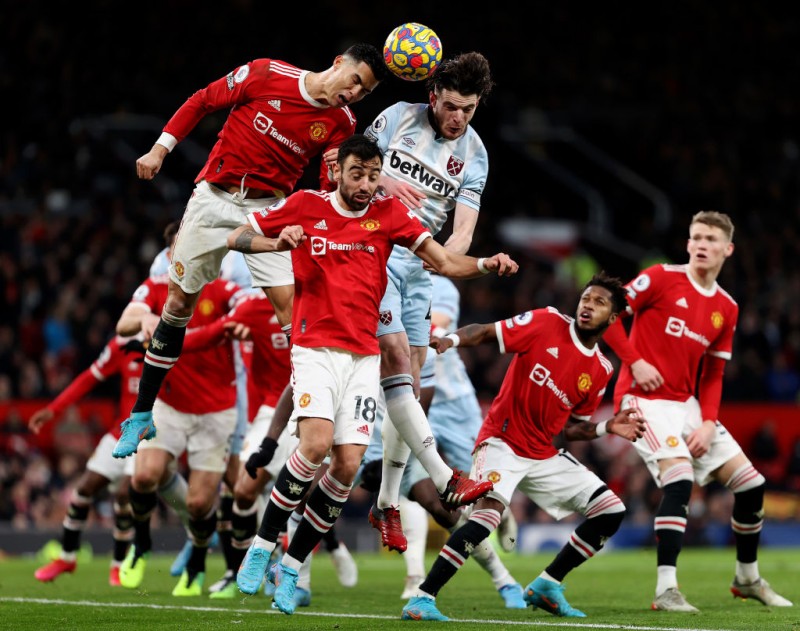 Cristiano Ronaldo and Bruno Fernandes of Manchester United battle for the ball in the air with Declan Rice of West Ham United. (Photo by Naomi Baker/Getty Images)

'You move on' - David Moyes on losing big players

END_OF_DOCUMENT_TOKEN_TO_BE_REPLACED

During a press conference, last week, West Ham boss David Moyes insisted Declan Rice was contracted to the club 'for the next three and a half years'.

The Scot was surprised to be told, by a reporter, that there was a story going around - courtesy of Fabrizio Romano - that Rice was refusing to sign and new and improved contract. In attempting to assure supporters that he had experience of dealing with players that may be eyeing challenges elsewhere, Moyes said:

"I thought Wayne Rooney was irreplaceable [when I was Everton manager], but what happens in football is you move on."

END_OF_DOCUMENT_TOKEN_TO_BE_REPLACED

West Ham are not keen to sell Rice, but they would surely be tempted to part ways with the England international if a club offers them north of £100 million.

The issue there, is something reported by ESPN. The outlet claim that Manchester United's [usual] rivals, Liverpool, Chelsea and Manchester City, all have other areas that need addressing over the summer. Chelsea need to sort their defence, amid ongoing financial uncertainty, City are set to bring in Erling Haaland, while Liverpool could pick up a couple of reasonably priced summer transfers and hold out for Jude Bellingham in 2023.

Rice reportedly earns £62,000 a week and could almost triple it by moving to Manchester United. Paul Pogba is likely to move on, at the end of the season, and the club has been crying out for a dominant centre midfielder for years now.