Manchester United are prepared to terminate Cristiano Ronaldo's contract if his 'attitude' doesn't improve, according to reports.

Ronaldo has made it clear that he wants to leave Old Trafford this summer as he wants to play in the Champions League. The options available to the Portugal forward, however, appear limited.

Chelsea, Bayern Munich and Paris Saint-Germain all distanced themselves from a potential transfer. Atletico Madrid also backed away from a deal.

Yet, according to reports, Ronaldo could soon be a free agent. 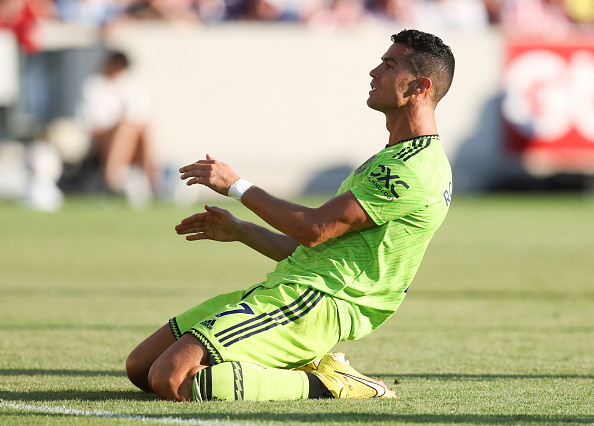 END_OF_DOCUMENT_TOKEN_TO_BE_REPLACED

Man United 'want to see a change' in Cristiano Ronaldo's attitude or they may have to consider 'terminating his contract', according to Sky Sports News.

Ronaldo started the Red Devils' 4-0 defeat to Brentford on Saturday and didn't hide his frustrations as the team slumped to another humiliating loss.

The Portugal captain has been seeking a move away from Old Trafford all summer.

By terminating his contract, Man United would seemingly be playing into the forward's hands and giving him exactly what he wants.

Man United have denied the reports.

Ronaldo wants to leave Old Trafford to play in the Champions League next season.

The former Real Madrid forward re-joined Man United last summer from Juventus, having originally played for the club between 2003 and 2009.

They have started the new season with two defeats, losing at home to Brighton and away to Brentford. United's next game is at home against Liverpool next Monday.