"Football is a game of mistakes and you get punished."

Erik ten Hag is two league games into his Manchester United managerial career and already expressing his sorrow that the club's lively away support has been forced to endure another chastening day.

United lost 4-0 to Brentford at the Gtech Community Stadium, on Saturday, to slip to bottom of the Premier League after two games. They found themselves 4-0 down after only 34 minutes after a horrendously inept first half performance that saw them struggle to get out of their own half, as well as gifting three of the goals to the hosts.

END_OF_DOCUMENT_TOKEN_TO_BE_REPLACED

The first two goals were a result of an attacking press on United in their own third. Brentford pounced to win the ball back from Cristiano Ronaldo and Christian Eriksen for the two goals, with the hapless David De Gea coming out, post-match, and putting his hand up for his sizeable role in both.

Following the game, ten Hag was asked if simply does not have the standard of players at United that are capable of playing out from the back, and keeping their heads under pressure. The Dutchman was not having it, though.

Nothing but antics from Man United here pic.twitter.com/YlDd8n2vGh

Mistakes can put your plans in the bin - Erik ten Hag

END_OF_DOCUMENT_TOKEN_TO_BE_REPLACED

Erik ten Hag was asked, in his post-match briefing, if he would consider 'altering your philosophy to fit in with these players'.

The reporter posited that many of the current United crop 'can't play the brand of football you want to play'. Ten Hag responded:

"This is a conclusion, I will not admit that. They can and show already in pre-season this has nothing to do with that and it's about when you make the mistakes you make, every plan and strategy you can put in the bin.

"I think we all have seen the game and I think Brentford was more hungry, and we concede goals in individual mistakes.

"You can have a good plan but we had to put the plan into the bin. I think it had nothing to do with tactical and that the first two goals, it's about dealing with the ball, that's one, and decisions.

"I think they follow my instructions, but they make bad decisions and that's football, it's a game of mistakes and you get punished." 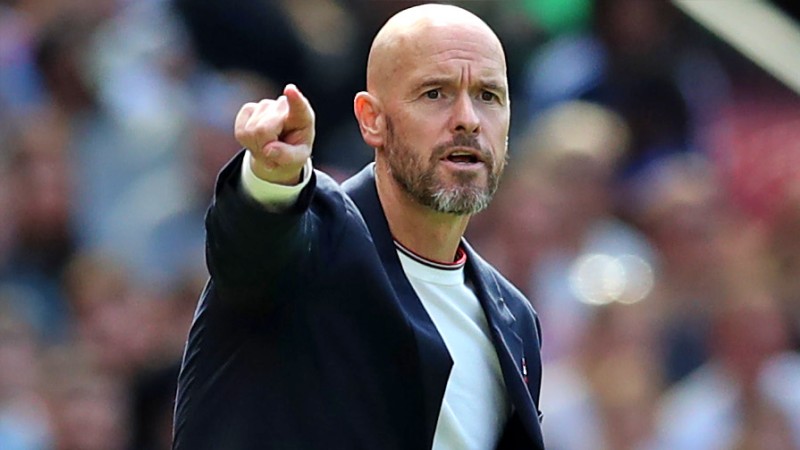 Many questioned ten Hag's decision to play Christian Eriksen in a centre midfield trio with Fred and Bruno Fernandes, leaving the Dane to play the No.6 role. Brentford midfielder Mathias Jensen said, post-match, that his team had gone after Eriksen when they saw he would be playing a holding midfielder role.

"I don't want to play from the back when it's not possible," said ten Hag. "It was naive how we played today; you have to play more direct. We attracted them, the space was high up the pitch, you have to do that option but that is what we didn't do.

"We will learn, we will have to learn, it's not good enough, clear, it's not the level and the standard how we want to act. It's not possible the opponent is more hungry than you are. I saw in the second-half a comeback but you have to start well and it's not good.

"When the results are like this, I can imagine that feeling, it's also no good. That we show that, clear, so we have to change that. We need more hunger on the pitch and show that as an individual and as a team."