Pep Guardiola has been warned.

Newport County are playing without fear and deserve their place in the fifth round of the FA Cup.

The League Two outfit claimed the scalp of Championship side Middlesbrough in their fourth round replay on Tuesday night, with Carlow man Pádraig Amond playing a starring role for the underdogs. 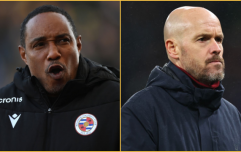 END_OF_DOCUMENT_TOKEN_TO_BE_REPLACED

Amond assisted Robbie Willmott for Newport's first at Rodney Parade but he saved one of the most beautifully-worked goals of the competition for 20 minutes later.

As Boro's defenders picked up their men in the box from a Newport corner, Amond pulled away to the penalty spot, took another couple of steps towards the edge of the area and let fly.

In a move straight from the training ground, the ball bounced twice in the box before it arrived at the right boot of Amond, whose connection couldn't have been more perfect as the ball rocketed beyond 'keeper Dimitrios Konstantopoulos.

👏 | Straight from the training ground! pic.twitter.com/JDctKtMkwk

END_OF_DOCUMENT_TOKEN_TO_BE_REPLACED

The celebrations tell you everything you need to know about how much the goal meant to Newport and their fans, who can look forward to hosting one of the best teams in Europe next week as they have been drawn against Manchester City in the fifth round.

Amond, previously of Shamrock Rovers and Sligo Rovers, was not the only Irishman to impress as Dubliner Mark O'Brien put in a solid shift at centre-back to leave Boro scoreless and keep the Newport dream alive.


popular
Ireland vs Wales: All the big talking points, moments and player ratings
Peter O'Mahony reaction to Liam Williams scuffle shows he may finally be mellowing
Patrick Horgan addresses infamous Kieran Kingston interview after Cork beat Limerick
Matt Williams tears into media for "rubbish" written about Ross Byrne
"You know why" - Jurgen Klopp refuses to speak to Athletic journalist at press conference
Conor McGregor offers solution to Croke Park fiasco that should suit all parties
Mikel Arteta's reaction to Everton defeat is epitome of the modern manager
You may also like
6 days ago
Ryan Reynolds makes bullish prediction ahead of Wrexham's big FA Cup moment
6 days ago
Former England captain says Fabinho should have sent off for Evan Ferguson challenge
1 week ago
Roy Keane leaves ITV pundits in stitches after Pep Guardiola's pre-match interview
2 weeks ago
Roy Keane leans into one of his go-to gags when discussing heroic goalkeeper
3 weeks ago
Wolves goal against Liverpool disallowed as there was no camera angle to overturn decision
4 weeks ago
"Seamus Coleman is in trouble" - Roy Keane was just speaking facts about the Everton star
Next Page