Antonio Valencia's Instagram was surely hacked after the Manchester derby

Antonio Valencia put in a shift on Sunday.

All the Ecuadorian ever seems to do is put in shifts.

That is by no means a bad thing but he must wonder, at times, how he ended up as a right back when he was purchased by Alex Ferguson as a winger.

END_OF_DOCUMENT_TOKEN_TO_BE_REPLACED

The 30-year-old, who often plays centre midfield for his country, kept Matteo Darmian out of the Manchester United side for the derby clash against City.

His main job was to neutralise Raheem Sterling and keep an eye on Aleksandar Kolarov. He ticked both of those boxes and supported Juan Mata in attack when he could.

However, the very selection of Valencia over the more ambitious, impulsive Darmian did not go down with many United fans. His inclusion hinted at a conservative approach that played true until the closing moments of a dry game of football.

Valencia limped off with a foot injury with less than 10 minutes on the clock, in the 0-0 draw, and may sit out Wednesday's League Cup meeting with Middlesbrough. 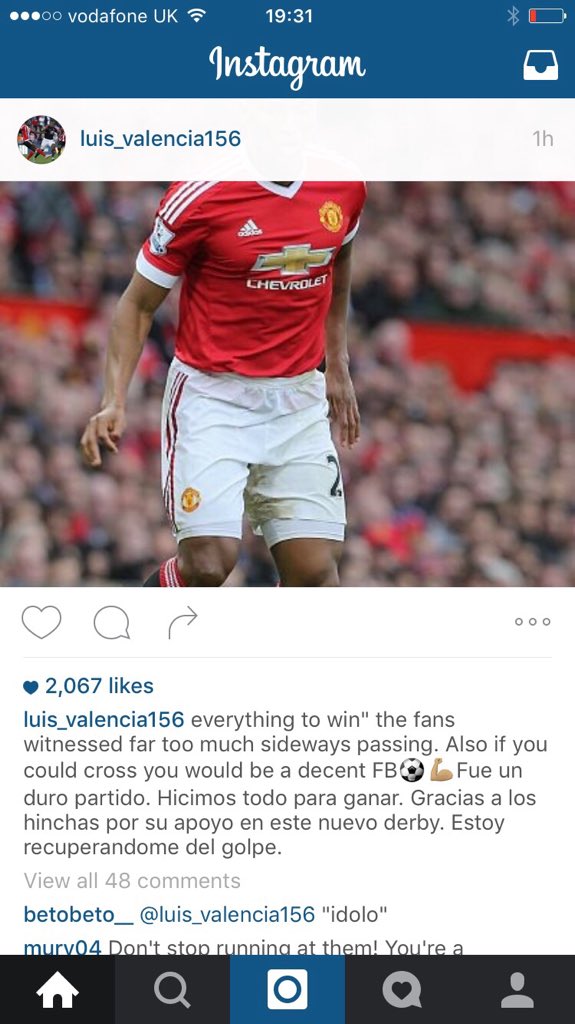 He may have been quoting some criticism directed towards him or someone close to 'Toni' has the log-in details.


popular
Roy Keane flatly rejects longstanding perception of ex-Man United midfielder Paul Ince
Sean Dyche set to be named Everton manager after Marcelo Bielsa talks break down
Allianz National Football League Round 1: All the action and talking points
Conor McGregor hit by car ‘at full speed’ while cycling
Roy Keane leaves ITV pundits in stitches after Pep Guardiola's pre-match interview
Quiz: Identify these 15 football clubs that are not named after a place
"I don't like to fill my time that way" - O'Hora going his own way in an era of obsessives and covering all bases
You may also like
4 days ago
Troy Deeney says Harry Maguire's agent contacted him after comments about the player
4 days ago
Cristiano Ronaldo told Jorge Mendes they were 'done' if he failed to find big transfer
4 days ago
Quiz: Name the Argentina players to have scored for Man United in the Premier League
5 days ago
Roy Keane gives his verdict on Mikel Arteta's touchline behaviour
5 days ago
Arsenal fans arrested in Uganda for celebrating Man United win
5 days ago
Roy Keane's threat to Cesc Fabregas about 'pizza incident' has panel in stitches
Next Page