Matthew Macklin's world title ambitions were all but served a critical blow tonight in Dublin as he was stunned by Jorge Sebastian Heiland.

The Tipperary Tornado headlined the main event but, after dominating the first two rounds as expected, he found his Argentine opponent hard to handle and was behind on the judges' scorecards before the 10th round knockout.

The Birmingham-born fighter had hopes of going on to be world champion and making serious noises, but after this defeat, there was a consensus that the 32-year-old's future lies in domestic bouts, if he doesn't walk away altogether. 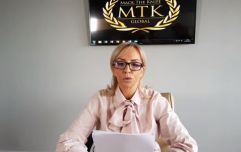 END_OF_DOCUMENT_TOKEN_TO_BE_REPLACED

"It was an accurate shot that put me down but it wasn't that heavy," Macklin assessed the 10th round winner.  "I had been tired for two or three rounds before that, truth be told.  Maybe I burned up a little too much energy early on, maybe I'm getting old.

"I'll have to see where I go from here."


popular
World Cup 2022 Day 18: All the major action and talking points
Gary Neville sticks up for Ronaldo as contextless pictures and videos taken as gospel
Rory McIlroy explains 'falling out' with Shane Lowry that lasted a few years
Cristiano Ronaldo's sister blasts Portugal boss' decision to start forward on the bench
Brazil star responds after Roy Keane slates dancing celebrations
Eniola Aluko responds to criticism after on-air mistake on ITV
Ballyhale's Colin Fennelly felt Ballygunner's victory speech was disrespectful
You may also like
5 years ago
Passionate words from Matthew Macklin spark humble response from Conor McGregor
6 years ago
James McClean gets fighting fit for new season as he goes through pad work with Matthew Macklin
6 years ago
Relive the bravest three minutes of Matthew Macklin's courageous career
7 years ago
Talks between Matthew Macklin and Julio Cesar Chavez Jr fight are underway
7 years ago
VIDEO: Matthew Macklin returned to action tonight with a second round KO
7 years ago
Matthew Macklin reveals he was caught up in Garda raid on Dublin apartment
Next Page