"The last mile is never crowded."

You get the sense that, even if Kellie Harrington had lost Thursday morning's fight against her Thai opponent, the Portland Row fighter would still be standing in the ring smiling, still taking it all in her stride, still lifting her opponent's arm to the sky.

It's as if the 31-year-old has reached a state of zen during these Olympics, both in the ring and outside of it, and it was just moments after Thursday morning's silver-medal winning fight when the Dubliner showed what she's all about. Tension was running high in Kokugikan Arena after a tight, cagey fight but as the verdict narrowly went her way, Kellie Harrington looked like the calmest woman in Tokyo.

There was a gentle smile, a kiss of the glove and then it was straight over to her defeated opponent Sudaporn Seesondee, who Kellie consoled before lifting her arm to the sky. It was a genuine gesture from Harrington and it was yet another reminder of what a brilliant ambassador this woman is for Irish sport.

Kellie Harrington, class all the way through, raised her defeated opponents' arms to the sky after this morning's silver medal fight.

Another reminder of what a brilliant ambassador this woman is for Irish sport.https://t.co/xUz5GZ7R2n 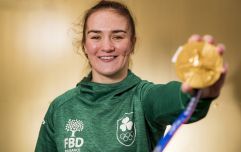 END_OF_DOCUMENT_TOKEN_TO_BE_REPLACED

On the back of her 3-2 victory, Harrington has now become only the 8th Irish fighter in history to make it through to an Olympic final. It was in her RTÉ interview with Joe Stack not long after the fight when this inspirational champion came out with a quote that, in its simplicity and definitiveness, should be shown to every young sportsperson. It's not all Olympic medals and roses in the garden, it's not an easy pathway to success, it takes hard work and years of dedication. Kellie talked about the last mile, how it's always an individual and a lonely journey, how it's the last mile that makes the difference.

"As my brother says, the last mile is never crowded and that’s the way it does feel sometimes. It does feel very lonely am, but I suppose the’s the difference to be able to hold on in there and keep it going."

"The last mile is never crowded and that’s the way it does feel sometimes. The difference is to be able to hold on in there, to keep it going."

Kellie Harrington knows how hard she's worked for this. What a tremendous quote 👏pic.twitter.com/iHWMHsdusu

Harrington has kept in there all her life. She's kept it going and now as an Olympic finalist, there is just one more step to go.


popular
Inbetweeners star sends All-Ireland semi-final message to Derry cult hero
"Jesus they never shut up, do they?" - What it was like training under Rory Gallagher and Jim McGuinness
Erik ten Hag 'accepts' Man United's decision about Cristiano Ronaldo
Dublin edge Kerry in combined team as 'underdogs' get the nod on paper
Only die-hard rugby fans will get full marks in our Ireland vs. All Blacks quiz
Your guide to a massive weekend of sport and how to stream it all
"Sometimes a manager has to make those bold and tough calls." - Kerry's Paudie Clifford conundrum

You may also like
9 months ago
Olympic Silver Medalist reveals she was pregnant during Tokyo 2020
10 months ago
"Best day of my life" - Nicole Turner delivers joyous interview after silver medal win
10 months ago
Jamaican gold medalist tracks down volunteer who gave him taxi money to Olympic race
10 months ago
"She won gold for her road, her community, her county, her country and her sport"
10 months ago
Kellie Harrington delivers fight of her life to claim Olympic gold
11 months ago
German pentathlon coach thrown out of Tokyo Games for 'punching a horse'
Next Page