The previous back-and-forths between Tyson Fury and Eddie Hearn could be described as nothing more than a bit of banter but things definitely look like they're getting nasty.

Hearn has not taken kindly to Fury's comments about his father, Barry Hearn, earlier this week and accused 'The Gypsy King' of failing to fulfil his promise to donate the entirety of his purse for the Deontay Wilder title fight to charity.

Ahead of December's clash with Wilder in Los Angeles, Fury vowed to use his disclosed $3 million purse to help homeless people and earned plaudits for the promise.

END_OF_DOCUMENT_TOKEN_TO_BE_REPLACED

But as Hearn hit back at Fury for his Instagram post earlier this week in which he told the Matchroom Boxing boss to keep Barry Hearn in check by giving him "another can of beer and put him back in the cupboard", he claims that Fury never donated his earnings to charity.

"I thought it was really disrespectful, to be honest," Hearn told iFL TV.

"He’s talking about, ‘He’s a boozer, a drinker.’ He’s not but let’s look at the history of people.

"You can’t really be pretending you’re this great role model and then talking to people like that. So I was disappointed with Tyson’s comments but it is what it is with him.

"One minute he’s giving his entire purse away to charity, which obviously he never did, and on the other hand he’s now going back to his diggy ways of negativity.

"I don’t take too kindly to anybody talking about my family."

Fury is set to fight Tom Schwarz next month in his first bout on his new ESPN deal and it was the quality of his next opponent that prompted Barry Hearn's criticism of Fury. 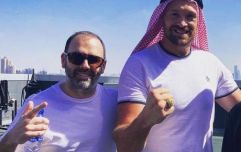 END_OF_DOCUMENT_TOKEN_TO_BE_REPLACED

And Eddie Hearn has echoed his father's comments by ridiculing Fury for how he is spinning his next fight.

"He [Schwarz] ain’t the best. That’s all my dad was saying, but it’s obviously hit a nerve with Tyson," Hearn continued.

"But again, Tyson does a great job of telling people he’s this and he’s that.

"And I understand that because he’s making a lot of money but I’m not going to respond and start slagging him off because I can’t be bothered with it."