What else do you want to know?

END_OF_DOCUMENT_TOKEN_TO_BE_REPLACED

The Derry darts star took on The Power in the quarter-finals of the 2017 Grand Slam but, according to the 16-time world champion, the worst thing he did was that he poured himself a glass of water and not Taylor.

Gurney has been on a stunning trajectory in the last number of years and now he's put himself in line as one of Phil Taylor's greatest enemies.

Last year, the Derry native made it the whole way to the PDC World Darts Championship semi-final and, Christ, he gave the viewing public - and mostly the rowdy ones at the Alexandria - a hell of a ride with one of the most nervy checkouts of all time.

Daryl Gurney feeling the pressure in one of the most nerve-racking games of darts ever! pic.twitter.com/h6cClWwAVe 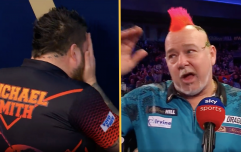 END_OF_DOCUMENT_TOKEN_TO_BE_REPLACED

This week, he bowed out of the Grand Slam at the quarter-final stage as Phil Taylor saw him off in a final set deadlock to win 5-4 but the English man admitted that he was especially fired up to show Gurney what was what.

Why? Well, because he didn't pour him a glass of water. What else?

"The worst thing he (Gurney) did was go on stage, pour himself a drink of water and left me out," Taylor said.

"I thought, you disrespectful little shit.

Then, of course, he started writing off Gurney completely - despite accepting that he's a fine darts player.

"I think he needs to grow up and re-evaluate what he's doing. He's a cracking player but his attitude is all wrong," Taylor continued.

"He needs to learn. Is he the future of darts? No. I don't think so. Let him sit down and cry a bit because I don't give a shit to be honest with you."

Jesus. I'll get you your bloody water.