A video shared on Twitter has shown Olympic champion Usain Bolt in an incredible light. Some athletes have diva-like attitudes (Cristiano Ronaldo), but Bolt proves that not all athletes are completely self-obsessed.

You can tell a lot about a person by how they treat support staff... 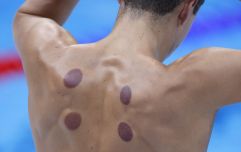 END_OF_DOCUMENT_TOKEN_TO_BE_REPLACED

Usain Bolt, who hails from Jamaica, was literally born to run. Come on; his last name is Bolt!

The eight-time Olympic gold medallist lived and breathed sports since he was a child, developing a love for running, European football teams, and cricket. But his most notable skill is his sprinting, which has earned him recognition worldwide. He is widely considered the greatest sprinter of all time, besides me when the Deliveroo driver says he is at the door.

In the video above, Bolt is seen interacting with staff at competitions. Everyone has smiles on their faces, and the interactions seem genuine and heartfelt. Bolt gives lots of staff fist bumps and handshakes, proving why he is one of the most beloved sportsmen on the planet.


popular
Brendan Ó Dufaigh gives a powerful interview on an emotional night in Ulster
Jamaica teammates are as frosty after Thompson-Herah's history-making 100m win
Full player ratings as South Africa leave Lions battered, bruised and beaten
Cheslin Kolbe somehow avoids red card after leaving Conor Murray in awful heap
Paul O'Donovan busts the cliches and leaves the mystery behind him in one more emphatic interview
Warren Gatland gives his take on that dangerous challenge on Conor Murray
McIlroy and Lowry right in the mix for Olympic gold in Tokyo
You may also like
11 hours ago
Jamaica teammates are as frosty after Thompson-Herah's history-making 100m win
18 hours ago
Man City submit English transfer record-shattering bid for Jack Grealish
1 day ago
Marcus Rashford to undergo 'imminent' surgery after United consultation
1 day ago
Seven things to watch to quench that football thirst before the new season kicks off
2 days ago
Wayne Rooney apologises to family and Derby over leaked online images
4 days ago
QUIZ: Can you name these 5 players from their career paths?
Next Page