"UCC from the depths of hell."

It's hard to tell what was better: the closing stage of the women's 4x400m relay in the IUAA, or the priceless - soon to be iconic - commentary that accompanied it. 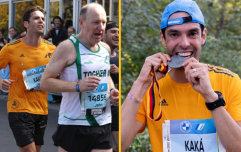 END_OF_DOCUMENT_TOKEN_TO_BE_REPLACED

The Irish Universities Athletics Association was lit up on Sunday with the most breathtaking finale - possibly of all time.

University College Cork clinched the women's 4x400m - literally from the depths of hell - in a race looked to be sown up by UCD.

Michelle Finn of University of Limerick started the thriller in the final leg when she put on the afterburners and looked to be storming to victory.

Then CIT came. Then UCC came.

It was ridiculous, especially considering where Phil Healy came from.

50 seconds out from the finishing line, Healy's efforts were admirable.

"UCC look good in fifth and look like they will pass out DCU into fourth place."

By the time the finishing line was reached, Healy's efforts were historic.

Fast forward to 3 minutes 5 seconds for the incredible final leg.

Clip from YouTube/Ntrai via Storyful.


popular
World Cup 2022 Day 12: All the major action and talking points
From Ireland to Argentina: Alexis Mac Allister's Irish roots explained
The FootballJOE Qatar World Cup 2022 Geography Quiz
France demand FIFA change result of World Cup defeat over 'rule break'
The World Cup 2022 team of the tournament so far
Cristiano Ronaldo 'agrees £173m-a-year deal' with Saudi club
Argentina reach World Cup last-16 with convincing win over Poland
You may also like
1 year ago
Emotive 'Run in the Dark' promo will resonate with runners across the country
1 year ago
"The GOAT of Paralympics. We all look up to this guy" - Michael McKillop leaves a legend
1 year ago
Incredible photo finish sees Jason Smyth win Paralympics gold in 100-metres
1 year ago
Lamont Marcell Jacobs continues Italy's golden summer with 100m win
1 year ago
Norwegian handball team fined for refusing to wear bikini bottoms at Olympics
1 year ago
You have broken the world record Emer McKee and you have also broken an island's delusions
Next Page