Tyrone teenager Nick Griggs has been blazing through competitions, and yesterday in Dublin he set his third Irish under-20 record in a month.

This is 17-year-old Nick Griggs. Tonight he smashed the 4-min mile. 3:56:40 - incredible accomplishment - and a sound young man🙌🏻🙌🏻 pic.twitter.com/VjMeuEftL1 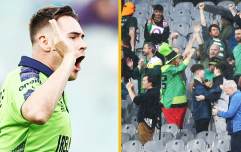 END_OF_DOCUMENT_TOKEN_TO_BE_REPLACED

Jim McGuinness from the north of Ireland holds the senior outdoor record of 3:55.00, a target that will surely be in Griggs' sights for the upcoming season.

Griggs managed to put Olympic semi-finalist Andrew Coscoran, under huge pressure in the race and there is only more to come from the Balbriggan man.

"I don't even have the words for it, my coach just said to stick behind Andy, the Olympic semi-finalist, and to even be racing with an Olympian is mad, something I never thought I would do.

"I was thinking in my head if I have a perfect race, 3:59.9 was on the cards, and the plan went quite perfect, just went out hard, then Coscoran picked it up, and I just felt good on a whim.

"I felt really strong, and I managed to come home with a new PB, and a new u20 European record, which I'm absolutely buzzing about."