Could Thursday, August 11 be the day when Ireland's Olympic fortunes turned around?

Steven Donnelly is one fight away from an Olympic medal.

The Ballymena welterweight is into the last eight at Rio 2016 after winning a split decision over Mongolia's Tuvshinbat Byamba.

Donnelly had the better of the first round, got tagged a couple of times in the second but rallied well in the third. Two judges felt he had the edge and scored it 30-27, 29-28 and 28-29 in Donnelly's favour.

Post-fight, Donnelly, who was sporting a nasty cut above his left eye, told RTE:

"It was a really tough fight... I dug in to the very end and here I am. I won my first two fights and I'm flying." 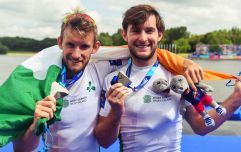 END_OF_DOCUMENT_TOKEN_TO_BE_REPLACED

Up next, if he wants a medal, Donnelly will have to get by Moroccan world champion Mohammed Rabii.

Following the defeats of Paddy Barnes, Joe Ward and David Oliver Joyce, this is a much needed boon for Team Ireland. Brendan Irvine, Michael Conlan and Katie Taylor are still in with medal shouts.


popular
Gatland comments give insight as to why CJ Stander missed Lions call
The Garry Ringrose narrative around the Lions Tour is complete bull
The SportsJOE 12 o'clock quiz | Day 347
'Jesus Christ! How am I going to put up with this lad for nine weeks?!'
Courtney Lawes and Jack Conan were the Lions 36th and 37th men
The English media reaction to Lions squad announcement was suitably spiky
Lions XV that should start the First Test against South Africa
You may also like
1 day ago
Performances against England saw Bundee Aki and Jack Conan become Lions
3 days ago
James Ryan and Iain Henderson may be fighting for one Lions spot
1 week ago
Tadhg Furlong declared 'single most important player for Lions touring party'
1 week ago
"It's going to be the biggest thing in this person's life, ever" - Rory Best reveals his Lions captain pick
1 week ago
When Gordon D'Arcy brought a coffee to a Joe Schmidt walk-through
1 week ago
Full Ireland ratings as Murphy-Crowe and Flood make the difference
Next Page