Serena Williams lost the US Open final to Naomi Osaka

The 23-time Grand Slam winner has accused umpire Carlos Ramos of treating men less harshly for their on-court conduct, demanding an apology from the umpire after she received a coaching violation.

Williams was penalised by Ramos for three code violations during her 6-2, 6-4 loss to the 20-year-old Osaka on Saturday: one for getting coaching signals; one for breaking her racket, which cost her a point; and one for calling the chair umpire a thief, which cost her a game.

But the match penalties did not prevent her from doubling down on her on-court accusations in the post-match press conference.

“I’m here fighting for women’s rights and for women’s equality and for all kinds of stuff. For me to say ‘thief,’ and for him to take a game, it made me feel like it was a sexist remark. He’s never taken a game from a man because they said ‘thief’.

“For me, it blows my mind,” Williams said. “But I’m going to continue to fight for women.”

While on court, Williams pleaded with the tournament referee, Brian Earley, saying: “Because I’m a woman, you’re going to take this away from me?”

Two-time Australian Open champion and two-time US Open runner-up Victoria Azarenka sympathised with Williams' grievances, stating on Twitter that: “If it was men’s match, this wouldn’t happen like this. It just wouldn’t.”

If it was men’s match, this wouldn’t happen like this.
It just wouldn’t 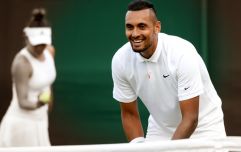 END_OF_DOCUMENT_TOKEN_TO_BE_REPLACED

Billie Jean King, who won 12 Grand Slam singles titles and helped found the women’s tennis tour and pave the way for equal prize money in the sport, also expressed sympathy towards Williams, explaining that players should not be punished for the actions of their coaches.

“Several things went very wrong during the US Open women’s finals today,” King wrote. “Coaching on every point should be allowed in tennis. It isn’t, and as a result, a player was penalized for the actions of her coach. This should not happen.”

In a second tweet, King said: “When a woman is emotional, she’s ‘hysterical’ and she’s penalised for it. When a man does the same, he’s ‘outspoken’ & and there are no repercussions. Thank you (Serena Williams) for calling out this double standard. More voices are needed to do the same.”

Williams went on to state that she hopes this whole situation will be a breakthrough for future female tennis players who show their emotions on court.

Same umpire accused Venus of cheating in 2016 gave her a coaching violation because of it.

So when I say there is racial bias, please stop denying the obvious.

This is disgusting. Serena knew exactly what was happening and fought for the truth. #USOpen
https://t.co/nYt1z70rFl


popular
Roy Keane on the experience of being managed by Jack Charlton at USA 94
The SportsJOE 12 o'clock quiz | Jack Charlton special (Day 112)
"Never back against the Irish" - How the BBC covered our USA 94 win over Italy
WATCH: Amazing scenes at Aviva Stadium as Jack Charlton is given standing ovation
When the President interrupted a Euro 88 pint between Charlton and Dunphy
'ROG was the kingpin... he just wanted to win, win, win' - Barry Murphy
Packie Bonner on being Celtic's teenage goalkeeper and angering Jack Charlton at Euro 88
You may also like
1 year ago
Nick Kyrgios blasts Irish umpire in first-round match at Fever-Tree
1 year ago
Andy Murray says he is "pain free" after hip operation
1 year ago
Serena Williams at the centre of Nike's advert on women in sport
1 year ago
Bradley Wiggins has a crack at Wimbledon and 'elitist' sports
1 year ago
Serena Williams handed hefty fine following US Open final
1 year ago
Aliza Cornet given slap on wrist for changing her shirt on court
Next Page