Serena Williams powers to 19th Grand Slam win Down Under

Serena Williams defeated Maria Sharapova in straight sets at the Australian Open, in Melbourne, to confirm her dominance in the women's game.

Williams had simply too much power and precision for the Russian as she took the contest 6-3, 7-6 to claim Grand Slam win number 19. The feat is all the more remarkable as she has been in 23 finals [and 83% win rate].

The victory sees her surpass Martina Navratilova and Billie Jean King for Grand Slam titles. She is still five short of Margaret Court [22] while Steffi Graf is on 22.

END_OF_DOCUMENT_TOKEN_TO_BE_REPLACED

Sharapova gave up her serve in the first game of the day and was left playing catch-up for a rain interrupted first set. Williams closed it out with a number of crisps winners but was drawn into a second set scrap.

Sharapova saved match point, on her serve, in the 10th game of the set, held out and then dragged her opponent to deuce in the next game. Williams survived but could not prevent a second set tie-break. 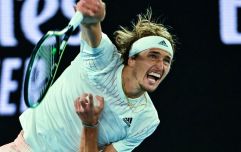 END_OF_DOCUMENT_TOKEN_TO_BE_REPLACED

At 5-4 (to Williams) in the tie-break, the American unleashed an audacious forehand winner to give herself two match points. Sharapova saved the first but could not prevent the second. Williams, the champion, let rip with a series of whoops, hollers and hugs.


popular
Andy Farrell goes for Munster veterans as Ireland team to face New Zealand named
The four stone-cold certainties for All-Stars even as early as this
"The economy was one of the big reasons" - Cadogan's move from an electrician to personal training
Eamon McGee just couldn't help himself with Armagh-melee tweet
"He's actually smiling putting the ball over the bar. He should nearly be fainting." - Ryall on Limerick's legacy
Kylian Mbappe reportedly wants PSG to sell Neymar
Gavin Coombes one of four Irish players to push themselves into Test picture
You may also like
4 months ago
Rafael Nadal wins record 21st Grand Slam in Australian Open victory
5 months ago
"Pretty bloody special!" - Ash Barty becomes first home Australian Open winner in 44 years
5 months ago
Daniil Medvedev shuts up the Australian boo-boys with a brilliant post-match interview
5 months ago
Nemanja Matic slams 'shameful' treatment of Novak Djokovic
5 months ago
Australia confirms Novak Djokovic is banned from country for three years
5 months ago
Novak Djokovic speaks out after losing visa battle in Australia
Next Page