Sam Bennett may have converted a lot of folks into cycling fans with his incredible win at Giro d'Italia.

Irish professional cyclist Sam Bennett made history on Friday by winning stage 7 of the Giro d'Italia. Being the first Irishman since Stephen Roche in 1987 to claim a stage at the Giro is impressive enough, but how he accomplished it is mindblowing.

Bennett was near the top of a large group of riders heading into the final sprint of the race. He pumped those legs to take the inside lane (apologies to any cycling enthusiasts screaming at their screens for the lack of proper cycling terminology).

This manoeuvre left him in a great position heading into the final stretch. He found himself in third place as the rest of the cyclist edged towards the barrier closing in those who were left trailing.

Once he saw an opening, Bennett didn't hesitate to make his move. As the two leaders broke off, Bennett went for the win.

With just a few seconds left in the race, Bennett had it all to do. He was in third place, but one final push would see him cross the finish first.

And sure enough, it was the Irishman who crossed the line first. 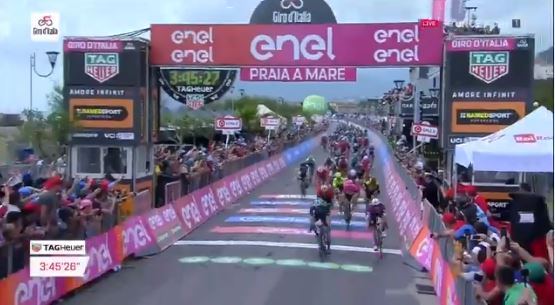 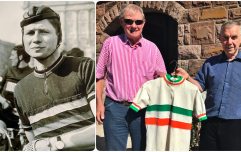 END_OF_DOCUMENT_TOKEN_TO_BE_REPLACED

For a pleb like me that doesn't know the intricacies of professional cycling, his timing appeared to be seriously impressive. The commentators seemed to agree with this sentiment as they got so excited one of them mistakenly called him 'Sean Bennett'.

Check out the incredible climax in the video embedded below.

'That was genius timing!' 😱

popular
The SportsJOE 12 o'clock quiz | Day 143
Three teams Leinster can pit against each other to prepare for Munster
SportsJOE 2000s Football Quiz | Round 12
Rory McIlroy defends Dustin Johnson after Brooks Koepka comments
Collin Morikawa makes huge world rankings leap as Lowry drops back
Only a Champions League fanatic would get full marks in this quiz
The SportsJOE 12 o'clock quiz | Day 142
You may also like
2 years ago
Bradley Wiggins accused of using performance enhancing drugs during Tour de France in bombshell report
3 years ago
Tour De France gendarme treats bloody annoying spectator the way we all want
3 years ago
We've found what must be Ireland's toughest cycling route
3 years ago
Truly shocking moment a clearly concussed cyclist helped to carry on with race after crash
3 years ago
WATCH: Police motorbike causes catastrophic crash in Giro d'Italia that wipes out Team Sky
3 years ago
Chris Froome photographs damage to bike after terrifying hit-and-run incident
Next Page