The former Bora-Hansgrohe Celebration teammates were rivals at this year's event.

Irish cyclist Sam Bennett will head up the Champs-Élysées, today, wearing the green jersey on the final day of the 2020 Tour de France. Barring an incredible series of events, the Carrick-On-Suir man will secure that jersey success and replicate the 1989 deeds of Sean Kelly.

Bennett has a stage victory during this year's event but his intermediate sprint victories [3] and high-placed finishes have put him on the brink of his first ever green jersey triumph.

The 29-year-old, who was born in Belgium but raised in Ireland, looks to have dethroned one of the greatest ever sprinter's in the game. Slovakia's Peter Sagan won his first green jersey on his tour debut, in 2012, and picked up another six since then. The only year he did not finish the tour in green was in 2017, after he was ejected for a dangerous move on Mark Cavendish in a sprint finish.

As it stands, Sagan is 55 points behind Bennett heading into Stage 21. There are a maximum of 70 points on offer in the green jersey points race but, to get them, the Slovak would have to win the intermediate sprint [20 points] and the stage [50] with Bennett finishing well back in both sectors.

Ahead of the final stage, then, Sagan took to Instagram to pay tribute to his rival, and former teammate, Bennett:

'We gave it our best an I will certainly give it my all to try and win in Paris. Congratulations to Sam Bennett for his green jersey in this Tour de France.' 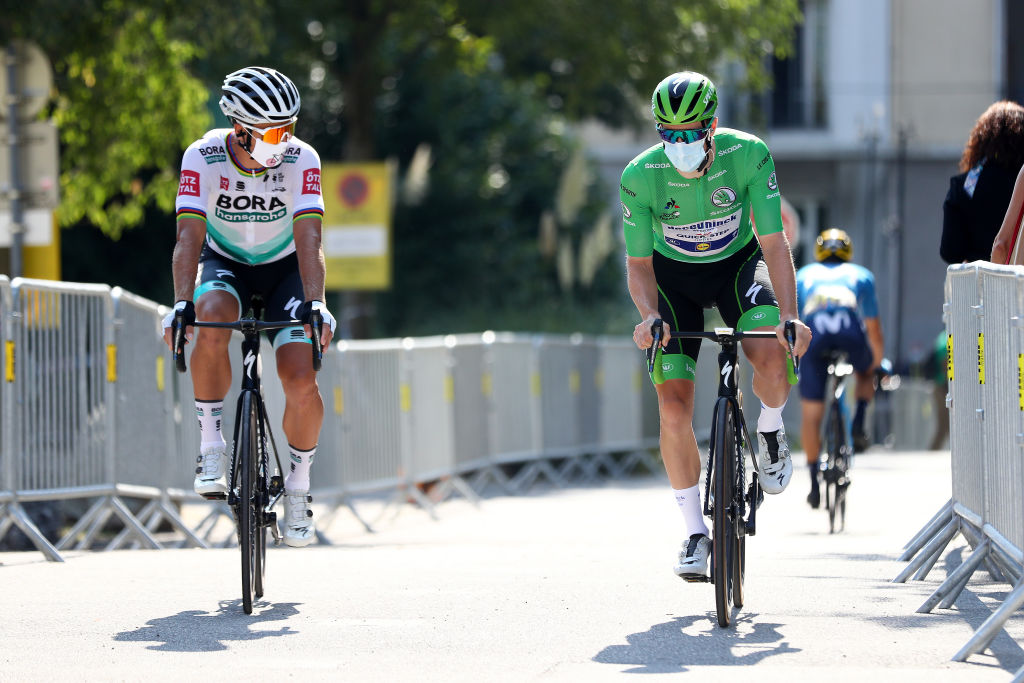 Bennett, of course, will be taking nothing for granted and his Deceuninck–Quick-Step teammates will be doing all they can to aid him in his cause.

The Irishman staved off Sagan, in Friday's Stage 19, to all but confirm his victory. Sagan attacked in the final breakaway but he was shadowed by Bennett and his teammate Dries Devenyns.

'I tried in every way possible today to go for the win and the team did its best to make that option happen,' Sagan wrote. 'When we broke away with about 30km to go, the group grew to 12 riders and there were four teams I think that had two riders in there. As a result, it was impossible for me to respond to all the attacks on my own.'

On Friday, Bennett let out a roar when he crossed the finish line. He knew most of the heavy lifting was done.

Sagan is one of the all-time greats and the ultimate competitor but even he feels this race has been run.


popular
The SportsJOE 12 o'clock quiz | Day 213
You have five minutes to name these four footballers, but it probably won't be enough time
The Ireland XV that should start against Italy
"There's a nice bit of balance in that full forward line" - Mayo moving well
Faith and Call of Duty - Lynch's Lockdown had a light at the end of the tunnel
Joe Rogan doesn't agree with giving McGregor a rematch against Khabib
The 17 best wonderkids to sign on FIFA 21 career mode
You may also like
1 month ago
Sam Bennett admission shows how incredible his final stage win was
1 month ago
Sam Bennett clinches green jersey after pulsating Paris finalé
1 month ago
Controversial disqualification gives Sam Bennett massive green jersey boost
1 month ago
Bradley Wiggins tries to claim Sam Bennett as 'British', right in front of Sean Kelly
1 month ago
Not a dry eye in Ireland as Sam Bennett breaks down after Tour de France triumph
2 months ago
The Irishman who led the Olympics after some audacious gate-crashing
Next Page