Kevin Burness dispatched of an animated Paul Nicholson with a 3-0 win over the Newcastle native in the first round of the PDC World Championship on Friday.

Burness won nine legs of 14 with two ton-plus finishes in a convincing win over Nicholson who certainly made his presence felt at the Ally Pally when he walked out to Joan Jett's Bad Reputation.

Accompanied with a pair of sunglasses, his entrance has been compared to the walkout of former UFC fighter Ronda Rousey who continues to use the song in the WWE.

🎯 🕶️BAD REPUTATION 🕶️🎯 We are about to get going again this evening but @TheAsset180 laid down a marker with his walk-on, and not just to the darts world, are you watching @RondaRousey #LoveTheDarts pic.twitter.com/yw3oiJJaBL

👀 Kevin Burness had never played at Ally Pally before today

😎 All in an afternoon's work.#WHDartspic.twitter.com/Q1BjPaRmeQ 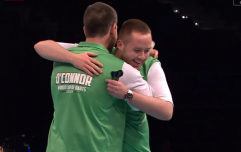 END_OF_DOCUMENT_TOKEN_TO_BE_REPLACED

Newtownards man Burness is making his debut at the Ally Pally this year and while he looked assured against Nicholson he will now face 2016 world champion Gary Anderson in the second round.

The Scot was dumped from the quarter-finals of last year's championship thanks to a 5-3 loss to 16-time world champion Phil Taylor.

Anderson, 48, told the Daily Star earlier this week that he plans to retire once he crosses the half century mark of his life and added that he does not plan on following Taylor in extending his career at the top level.

“I think I’ll be done before 50. Maybe this world championship and maybe the next one, but that’s it," said Anderson.

“I wouldn’t say I’ll retire 100 per cent – I’ll keep playing now and then, but not very often. “If I qualify for something, I’ll play in it, but I won’t be chasing ranking points across Europe. It won’t be happening.

“I wouldn’t do it the way Phil did and retire forever. I would turn up now and then to see if I can keep my Tour card, but once that goes, that will probably be me done.”

popular
Eric Dier calls Dele Alli on his tantrum in All Or Nothing changing room row
The SportsJOE 12 o'clock quiz | Day 181
Sean Kelly sums up emotion of a nation as Sam Bennett all but sews up the green jersey
"I've always said I'll go back and play. I'll 100% play with Portlaoise again, and I really want to play for Laois"
The Tipp minors who beat Dublin's golden generation: the ones that got away
QUIZ: Can you name the 5 Man United players in 15 seconds?
Anthony Stokes has Livingston contract terminated after Astro Turf struggles
You may also like
9 months ago
Christmas crackers - your festive sporting TV guide
1 year ago
Gerwyn Price reveals what was said in post-match skirmish with Derryman Daryl Gurney
1 year ago
Rafael van der Vaart makes winning start to darts career before second round defeat
1 year ago
Gerwyn Price criticised for bizarre behaviour in defeat to James Wade
1 year ago
Limerick's Willie O'Connor wins first PDC title
1 year ago
Rafael van der Vaart will play his first BDO darts tournament next month
Next Page