Back in 2014, Oscar Pistorious was sent to prison for six years for killing his girlfriend, Reeva Steenkamp.

The Supreme Court of Appeal, in Bloemfontein, has today increased the sentence of former Paralympian and Olympian Oscar Pistorius to 13 years for that crime.

The matter has been subject to a protracted legal battle for over four years and even the athlete's initial homicide conviction did not bring closure.

A judge in South Africa has ruled that Oscar Pistorius' conviction can be appealed. http://t.co/3sUvyvPGyd pic.twitter.com/faitHM6P3F 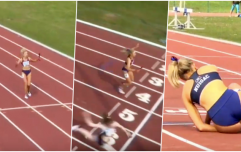 END_OF_DOCUMENT_TOKEN_TO_BE_REPLACED

The State had appealed to the court against the leniency of the initial six-year jail sentence.

As reported by News 24, Justice Legoabe Willie Seriti told the court, "The sentence imposed by the…[high court] with respect to murder is set aside and substituted with the following – the respondent’s imprisonment for 13 years and five months."

The new sentence was set out to be 15 years but Pistorious has already served 18 months in jail.