"I'm back in college on the twenty... something of August"

Mona McSharry smashed almost a whole second off the Irish record in the heats of the 200-metre Women's Breast-stroke, and still wanted more at the end.

The Sligo native, who reached the 100-metre Women's Breast-stroke Final and finished 8th, was not expecting to compete in the longer version, but got the nod to give it a crack in the heats.

END_OF_DOCUMENT_TOKEN_TO_BE_REPLACED

She finished second in the first heat in a time of 2:25.08, which was almost a full second better than the old record (2:25:92). There were three heats to follow, so McSharry, who was seeded 28th, was left hoping her time was good enough to make the semi-finals (Top 16). 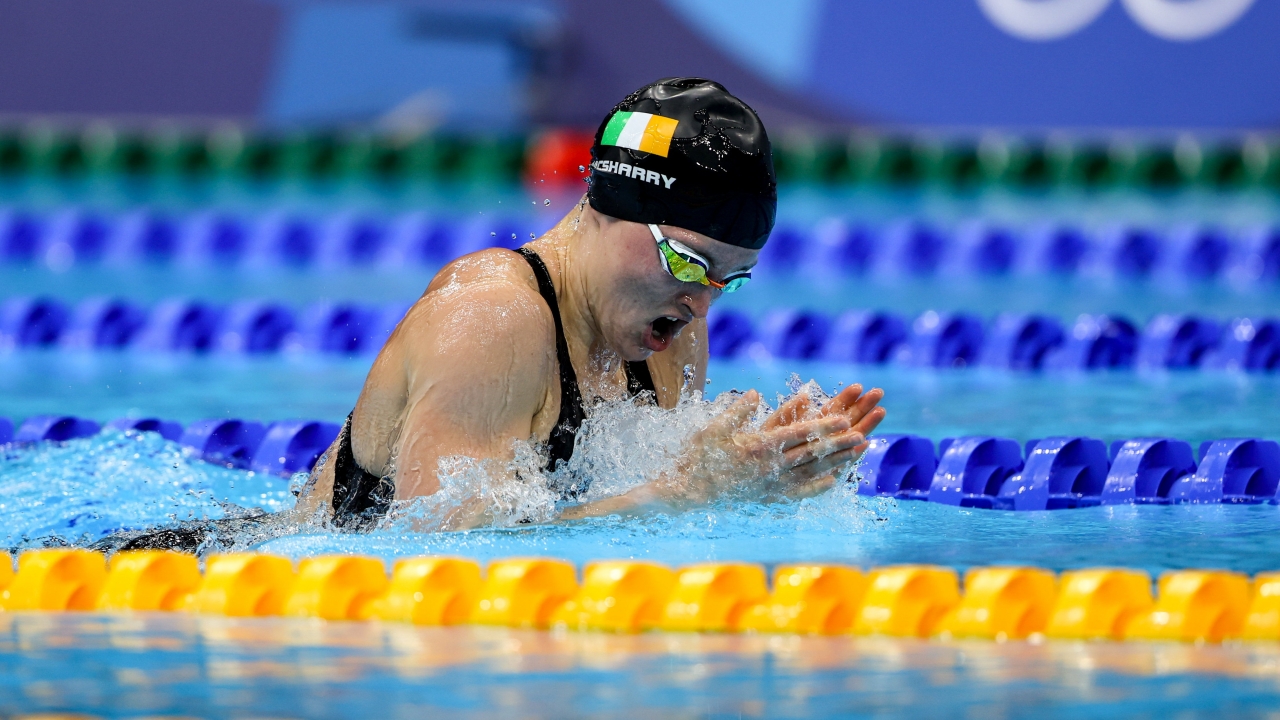 Mona McSharry of Ireland in action during the heats of the women's 200 metre breaststroke. (Photo by Ian MacNicol/Sportsfile)

Ultimately, it was not to be. The second heat was an absolute scorcher and seven of the eight finishers in that one all went faster than the winner of the first, unseeded heat.

Only a handful went faster in the third heat, so McSharry was still in with a semi-final shot as the competitors readied to go in the final heat. Again, there was a blazing pace in that, and the 200-metre world record was narrowly missed by 0:05 seconds. It meant, once all the times were tallied, McSharry missed out and finished 20th.

In her post-race interview with RTÉ, before her semi-final fate was decided, McSharry was pleased with her PB (Personal Best) at the Olympics.

"I like to be leading the race, more than catching," she said, "so I definitely enjoyed that. It was a good fight... I really enjoyed it."

"It's been a bit of a rollercoaster," she added. "A bit of a high after the 100 [final] and then not being sure if I was finished or not. So, trying to re-train my body into getting enough recovery and making sure I was rested for today...

"This is a great way to finish it. If this is the end, then I'm happy enough to finish on a PB in an event I was lucky enough to swim."

END_OF_DOCUMENT_TOKEN_TO_BE_REPLACED

McSharry has been encouraged by how much she has thrived in the white-hot Olympics atmosphere, kept smiling and been backed so massively from those back home.

Before the 20-year-old heads back to college, in the USA, she has plans to have a mini reunion with friends and family, and experiencing a few non-competing days in the Olympic Village.

"There's a lot of fun stuff to come," she declared.

Paris 2024 is only three years away and McSharry has given herself a great launch-pad for that, and the world and European championships ahead.


popular
"I never really cried or got emotional over what I've done as an individual. I couldn't give a s***"
"I was off the grid" - Aidan O'Shea respond's to Mayo criticism after club championship win
"If I break my wrist, it's on f***ing both of you." - Koepka and Berger act the spoiled child
'I won The Open by six shots in my home country, but this was the best week of my golfing career'
The FootballJOE Pub Quiz: Week 7
"I told him the absolute truth" - Sergio Garcia on his Ryder Cup talk with Rory McIlroy
Final Ryder Cup player ratings a tough read for some Team Europe big guns
You may also like
3 weeks ago
Kellie Harrington makes her decision between turning pro or staying amateur
1 month ago
"I’ve had some offers" - Kellie Harrington weighs up her options of turning professional or staying ameatuer
1 month ago
"It's crazy, but it's wonderful" - Kellie Harrington reacts to her home becoming a new GAA tourist attraction
1 month ago
Olympic medalist Aidan Walsh has a message for young kids looking to achieve their dreams
1 month ago
"I haven't actually slept since the fight" - Kellie Harrington is still coming to terms with her historic achievement
1 month ago
"I'm like a walrus" - Kenneth Egan's reaction to Kellie Harrington winning gold was priceless
Next Page