Disappointment for Sam Bennett, as 'curve-ball' forces him out of Tour de France

Having ruled the cycling world at the 2020 Tour De France, it's a shame that Carrick-on-Suir sprinter Sam Bennett has had to pull out of the 2020 edition, due to a minor injury.

It was during last year's tour when the 30-year-old Deceuninck–Quick-Step cyclist confirmed his place as the fastest sprinter in the business. As well as becoming the first Irish man since Sean Kelly to win the green jersey, Bennett won two stages in what you'd have to call his breakthrough year.

That fine form has continued into 2021, with Bennett having landed stages at Paris Nice, in the Algarve and on the UAE tour but his summer has been curtailed due to a 'really minor injury' he sustained while training. 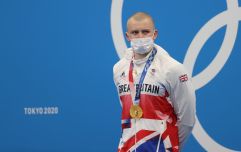 END_OF_DOCUMENT_TOKEN_TO_BE_REPLACED

The injury 'simply couldn't heal' in time with Bennett releasing the following statement via his team this afternoon.

"Needless to say, I'm very disappointed to not be able to defend my green jersey at this year’s Tour de France. I had a very minor incident during training a couple of weeks ago, which effected my knee,"

"While the injury I sustained is very short-term, it impacted my training for the biggest bike race in the world all too much and left me without enough time to be race fit.

"Le Tour deserves me at my best and it would do my team, and myself, an injustice to race in my current condition. I wish the whole Wolfpack a successful three weeks on the road of France."

The Irish man will be replaced on the team by the Tour's most successful ever sprinter, fellow former green jersey winner in Mark Cavendish.


popular
Brendan Ó Dufaigh gives a powerful interview on an emotional night in Ulster
Full player ratings as South Africa leave Lions battered, bruised and beaten
Jamaica teammates are as frosty after Thompson-Herah's history-making 100m win
Paul O'Donovan busts the cliches and leaves the mystery behind him in one more emphatic interview
Cheslin Kolbe somehow avoids red card after leaving Conor Murray in awful heap
Down u20 star dedicates Ulster victory to his late teammate in powerful interview
Warren Gatland gives his take on that dangerous challenge on Conor Murray
You may also like
1 week ago
Brisbane to host 2032 Olympic and Paralympic Games
1 week ago
The SportsJOE 12 o'clock quiz | Day 374
1 week ago
Norwegian handball team fined for refusing to wear bikini bottoms at Olympics
1 week ago
The SportsJOE 12 o'clock quiz | Day 373
1 week ago
Ugandan weightlifter goes missing after traveling to Tokyo Olympics
4 weeks ago
Andy Murray calls out English government after rolling back the years at Wimbledon
Next Page