There ain't no loneliness for Ireland'sdistance runners as our strongest team in years prepares for next month's European indoor athletics championships in Poland.

Competition has been at a premium these last few months and so Saturday's government approved micro-meet at the national arena was as eagerly anticipated as it was essential in terms of ranking points and qualification times.

And boy did our athletes deliver. No fewer than three national records were broken on the day as Ireland's distance runners continue to send ripples around the continent. 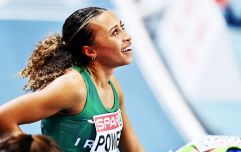 END_OF_DOCUMENT_TOKEN_TO_BE_REPLACED

Despite finishing in second place behind Mark English in the men's 800m, first mention must go to Longford 18-year-old Cian McPhilips who, with his time of 1.46.13, clocked the second fastest mark ever ran by a European under-20. The leaving cert student also banked Irish under-20 and under-23 records and would have taken out the senior mark too, were it not for the width of English's singlet.

The Donegal doctor finished three hundredths of a second ahead of McPhilips in an enthralling contest and rip-roaring finish that also saw John Fitzsimons of Kildare meet the European standard. English himself won a bronze medal at the 2019 major championship and these three lads will expect to be similarly competitive on the first weekend in March.

McPhilips ran the second fastest European U20 indoor 800m of all time with his 1.46.13 mark 🔥pic.twitter.com/ohdiwcTrBD

If not as tight, the men's 3000m contest was just as impressive as the first four past the line comfortably posted European qualification times. The classy John Travers got away from Cork's Darragh McElhinney with an irresistible last lap but the youngster couldn't be too disappointed, having broken the Irish under-23 record with his time of 7.50.80. To go with his junior 5km record of 13.54, McElhinney clearly has bags of potential. Behind the standard-setters, Hiko Tonosa and Conor Bradley were also inside the European standard.

When you consider that Nadia Power set a women's 800m record during the week, and that a grand total of seven Irish men have qualified for the 3km in Torun, it's clear that things are moving well for Ireland's distance runners. The tactics and margins of championship racing is clearly a different beast altogether but the performances and the team spirit within the Dublin track club and created by events like this one clearly bodes well.

Elsewhere, the in-form Sarah Lavin was at her best as she ran her second fastest ever time in the 60m hurdles (8.21), picking up some crucial world ranking points in her Tokyo qualification bid. Lavin will also be competing next month.

Day two of the Irish Life sponsored meet will be broadcast live on this Athletics Ireland stream today.


popular
"Some of the generals wanted me executed" - Irish rugby legend on flag caper that went wrong
"Johnno went, 'We’re not moving! You're trying to mess us about!'" - Ben Kay recalls red carpet controversy
Rio Ferdinand claims that Cristiano Ronaldo should have been told to 'sit down' against Young Boys
Garry Ringrose challenges "pretty ridiculous" changing conditions for women's players
Gary Neville embarrassed again following hasty Liverpool tweet
Michael Schumacher paralyzed and suffering from memory and speech problems
Clinton Morrison shares advice Roy Keane gave him on morning before Saipan showdown
You may also like
6 months ago
Super spikes are one thing but Ireland's golden generation have been a long time coming
6 months ago
Nadia Power smashes her own national 800m record by a second and a half
1 year ago
Ciara Mageean burns high class field with blistering kick around the bend
1 year ago
"Medically, I see myself as able bodied. I try to lead an able bodied life"
1 year ago
No loneliness for this long distance distance runner on Cork's thrilling coast
2 years ago
'Pulling on an Irish vest was the best day of my life. It meant so much to me'
Next Page