Poke the bear and he will respond.

The Belfast crowd booed Rob Cross from the moment 'Hot Hot Hot' blared over the SSE Arena Tannoys but the 28-year-old Pembury native was undeterred, inspired actually as he went onto roast Daryl Gurney and silence the home crowd with a piping display of darts.

Amidst all the boos and the jeers, the 28-year-old turned on the style in Gurney's back yard, shutting out the recently crowned European tour title winner with a 105 average and a ruthlessness before any doubles that came his way. 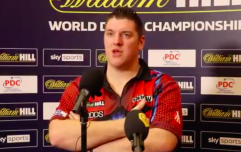 END_OF_DOCUMENT_TOKEN_TO_BE_REPLACED

He was on form on Thursday night.

It all started well for the boisterously supported Gurney, who saw the SSE almost erupt around him to the tune of his walk-on, Neil Diamond's Sweet Caroline.

The crowd were chanting his name, cheering him on. It must have felt like a new world for the Coleraine native, well used to being booed anytime he toes the oche in Dublin.

Talk about taking the roof off! 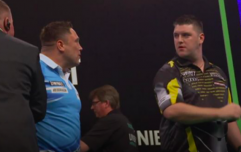 END_OF_DOCUMENT_TOKEN_TO_BE_REPLACED

He then went on to receive the throw before winning the first leg of the match. The omens were good, but that was as good as it would get however as Cross reminded us he's a thrower of world championship winning calibre.

With the crowd booing his every double, Cross seemed to relish the tension as he took them out in a business-like fashion. These boys were at their most audible early on in the game, with the fans fresh and rearing for it and Cross had the perfect response, nailing his meat and drink before saluting the 11'000 behind him.

BIG 117 checkout from Cross to kickstart him in this game... 💪 pic.twitter.com/8qm54VncXC

That's how it's done.

Gurney showed plenty of mettle to stay alive, most notably with a 112 checkout early on, but Cross went onto take it comfortably 8-4, sealing the deal with a bullseye.

Rob Cross wins it with a 124 checkout that JUST stays in the bullseye! He beats home hero Daryl Gurney 8-4.#Unibet180 pic.twitter.com/mYiM8ZVOHR

Having won his last three games in the Premier League, things aren't overly bad for Gurney, but he was nevertheless disappointed by Thursday's showing.

"It's devastating to get beaten in Belfast, but it's one of those things that I don't know what happened."