So Sha’Carri Richardson gets banned for smoking cannabis yet Megan Rapinoe is advertising a form of it...

It's not a good look for the Olympic committee.

US footballer Megan Rapinoe and the Olympic committee are being heavily criticised for mixed and contradictory messages regarding the use of cannabis.

Rapinoe, 36, featured in a recent Forbes article which saw her promoting a CBD (Cannabidiol) or cannabis product called Mendi, as well as highlighting how elite athletes use weed-based products to prepare for competitions.

END_OF_DOCUMENT_TOKEN_TO_BE_REPLACED

The company itself was founded by Rapinoe's sister Rachael and Brett Schwager, who said: “We really believe there is a movement and a flood of people wanting healthier alternative medications [...] So, we want to give people the healthiest option to stay on top of their game longer, specifically positioned with athletes.”

This, unsurprisingly, hasn't sat well with a lot of people.

Although marijuana is legal either recreationally or medicinally in several states across America, the Olympic organisers and United States Anti-Doping Agency (USADA) banned US sprinter, Sha’Carri Richardson, from the Games after she tested positive for having cannabis in her system.

Many have quickly pointed towards institutional racism as an underlying factor in the difference between the decision made for each athlete, respectively.

White supremacy is banning Sha’Carri Richardson for smoking weed while Megan Rapinoe gets praised for her use of CBD. Highly reminiscent of how crack cocaine is infinitely more heavily criminalized than powder cocaine to ensure the disproportionate incarceration of Black people. https://t.co/nwYBCqd4wT 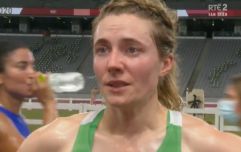 END_OF_DOCUMENT_TOKEN_TO_BE_REPLACED

When weed was legalised in New York earlier this year, an NYPD stat showed that Black and Latino people made up 94% of all marijuana-related arrests in 2020, despite there being more white weed smokers in the state.

Although Rapinoe did not test positive for any traces of THC (Tetrahydrocannabinol), the psychoactive agent in weed - or any potential doping/performance-enhancing substances, for that matter - this, for many, come across as somewhat hypocritical, not to mention poorly timed and pretty tactless.

While Richardson admitted to using cannabis after the death of her mother and a period of counselling, Rapinoe is essentially promoting it as a lifestyle choice and healthy alternative to other medications for professional athletes and people alike.

Many will be happy to see the further promotion of cannabis, as the stigma around smoking the plant continues to dwindle, but to see the Olympic authorities essentially turning a blind eye and going against their own logic will no doubt continue to be a source of frustration.


popular
"I never really cried or got emotional over what I've done as an individual. I couldn't give a s***"
"If I break my wrist, it's on f***ing both of you." - Koepka and Berger act the spoiled child
"I was off the grid" - Aidan O'Shea respond's to Mayo criticism after club championship win
The FootballJOE Pub Quiz: Week 7
Garry Ringrose raves about four young Leinster stars to watch this season
'I won The Open by six shots in my home country, but this was the best week of my golfing career'
Galway fans' frosty reception for Davy Fitz doesn't make any sense
You may also like
3 weeks ago
Kellie Harrington makes her decision between turning pro or staying amateur
1 month ago
"I’ve had some offers" - Kellie Harrington weighs up her options of turning professional or staying ameatuer
1 month ago
"It's crazy, but it's wonderful" - Kellie Harrington reacts to her home becoming a new GAA tourist attraction
1 month ago
Jamaican gold medalist tracks down volunteer who gave him taxi money to Olympic race
1 month ago
Olympic medalist Aidan Walsh has a message for young kids looking to achieve their dreams
1 month ago
"I haven't actually slept since the fight" - Kellie Harrington is still coming to terms with her historic achievement
Next Page