"It's been decades in the making, it's so much greater than us"

It couldn't possibly have been any more dramatic.

Pick any emotion in the world and the Irish women's hockey team went through it on an extraordinary night in Donnybrook where their dream flashed before their eyes, before eventually becoming a reality.

With the stakes at a monumental high Ireland Vs Canada was as cagey as you would expect and the teams were deadlocked by the end of it.

On they went to a penalty shootout where the Irish women looked a beaten docket. They were down 3-1 in the early stages of that shootout and Canada had all the momentum.

But that's when Ayeisha McFerran - the goalkeeper and the hero of the World Championship campaign last year - stepped up to the plate once more with two equally crucial and stunning saves.

Beth Barr and Chloe Watkins held their nerve to send it to sudden death, before Roisin Upton netted from the tightest of angles.

The Canadians missed their next penalty, but called for a video referral. With hearts in mouths all over Donnybrook, the video referee said there was no need for a referral and Ireland had qualified.

After years of near misses, after two nights of nervy hockey. After a video review that had heads in hands and after some heroic performances, the scenes were amazing when the Irish women found out they'd qualified for the Olympics 👏🇮🇪pic.twitter.com/XwxwH2ib8c 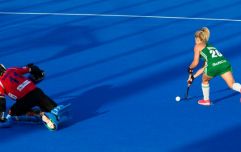 END_OF_DOCUMENT_TOKEN_TO_BE_REPLACED

"It's everything. This is the dream, we've come close in the past. This is everything to us. Since we started out, it was always about the Olympics," said Irish star Nicola Daly on RTÉ after.

"Never would I have thought we'd be playing hockey in the middle of Donnybrook, the whole thing has just come together amazing," she added.

"We were trying to imagine what this feeling might be like during the week, but it completely surpasses it 20 times over. It's been decades in the making, everything that we're trying to achieve is so much greater than us. My idols, legends that I grew up dreaming about, they've all been here. I feel so privileged to be a part of this team and to be looking forward to Tokyo..."

popular
Eric Dier calls Dele Alli on his tantrum in All Or Nothing changing room row
SportsJOE 2000s Football Quiz | Round 16
Sean Kelly sums up emotion of a nation as Sam Bennett all but sews up the green jersey
"I've always said I'll go back and play. I'll 100% play with Portlaoise again, and I really want to play for Laois"
The SportsJOE 12 o'clock quiz | Day 181
The Tipp minors who beat Dublin's golden generation: the ones that got away
The Alby Mathewson speech that lit a fire under Ulster
You may also like
1 year ago
Ireland's hockey heroes revisit life changing World Cup
2 years ago
What is sport if it is not to inspire?
2 years ago
Brave Irish women's hockey team lose World Cup final to the Netherlands in London
2 years ago
Ireland have won the over 50's World Cup
2 years ago
Irish hockey coach Graham Shaw sticks it to Holland after Spain win
2 years ago
Complete TV guide for a bumper Sunday of sport
Next Page