WATCH: New England complete historic 25-point Super Bowl comeback but all anyone can talk about is one catch

History was made in Houston.

Sweet mother of jumpin' Jesus, where were ye?

Tom Brady became the first quarter-back to win five Super Bowls as he led New England to the first over-time victory in the 51-year history of the feted American football season finale.

The Patriots were 28-3 down to the Atlanta Falcons but scored 25 unanswered points to tie the game and send a bonkers game to over-time. Bill Belichick's men won the toss and Brady drove them to the decisive touchdown.

Listen, that was lovely and all but this game will forever be remembered for a simply ridiculous catch. No, not this one, as ridiculous as this one was. 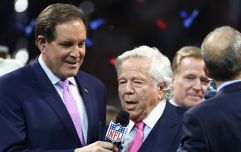 END_OF_DOCUMENT_TOKEN_TO_BE_REPLACED

Julio Jones, the Falcons' super human wide receiver, ended up on the losing side because of a mind-boggling catch by the Patriots' Julian Edelman.

This was the moment that will forever be compared to David Tyree's famous 'helmet catch' that cost the Patriots the Super Bowl nine years ago against the New York Giants.

This, this was stunning.

You get the impression this could be THE moment https://t.co/Zy8dW4Rdhs #SB51

END_OF_DOCUMENT_TOKEN_TO_BE_REPLACED

The wide receiver had dropped some clangers before this but when his team absolutely needed him he was there, he was there to catch a bouncing ball off the heel of a Falcons defender. Absolutely insane. What attitude, what reflexes, what instincts.

Brady's team needed two two-point conversions to take the game to over-time and make it five wins in seven Super Bowl visits for Belichick's remarkable Patriots. But it was Edelman's pass that had fans enraptured.

What do we call that?

Julio Jones: "I just had the catch of the year."

Let's all take a second to remember that Julian Edelman catch. Insane.

One of the greatest things I've ever seen and I don't just mean in sport . Edelman catch was this generations Moon landing #SuperBowl

They should give Edelman the MVP just for THAT catch !

We are not worthy, Julian Edelman pic.twitter.com/4UUtkF5hQW

Trying to stop the food from hitting the floor like. #SuperBowl #edelman pic.twitter.com/b0C0Mggqjz


popular
Roy Keane on the experience of being managed by Jack Charlton at USA 94
The SportsJOE 12 o'clock quiz | Jack Charlton special (Day 112)
An Ireland XI of players who didn't get the recognition they deserved
"Never back against the Irish" - How the BBC covered our USA 94 win over Italy
WATCH: Amazing scenes at Aviva Stadium as Jack Charlton is given standing ovation
'ROG was the kingpin... he just wanted to win, win, win' - Barry Murphy
When the President interrupted a Euro 88 pint between Charlton and Dunphy

You may also like
1 year ago
Prop punters were not one bit happy about the Super Bowl national anthem
1 year ago
Patriots mascot ends up in hospital after tackle from Jets safety Jamal Adams
1 year ago
The complete spoofer’s guide to talking about Super Bowl LIII
1 year ago
'I'm too old, you're too slow' - Tom Brady fires back at Patriots critics
2 years ago
Watch: Malcolm Jenkins obliterates Brandin Cooks with vicious hit
1 year ago
NFL predictions: Expect a huge backlash from Tom Brady after last weeks defeat
Next Page