Being a cheerleader is tough sometimes

We await the day in Ireland when its sportingly acceptable to have women in short skirts and pom-poms cheering teams along the sideline. It would sure make a change to the level of abuse our various sportsmen and women get seemingly every week. However it may also come with a severe health warning after events in a college basketball in the USA overnight.

If you have your back to play well there's no way to protect yourself and that is where things could get very dangerous indeed. 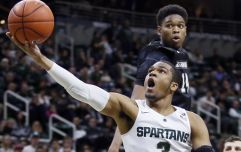 END_OF_DOCUMENT_TOKEN_TO_BE_REPLACED

During Tuesday night's 66-48 win for the  Kentucky Wildcats over Tennessee in Knoxville, Devin Booker was all set for a handy two points with a basic lay-up, when he was fouled and as he carried through he then smashed into the unsuspecting cheerleader

He took her out at the knees and to be fair if he was at the Aviva or Twickenham it would be a tackle he should be proud of.

Hopefully she recovered and he even got a chance to say sorry on Twitter after the game :

Is that Vol cheerleader alright? My bad.


popular
World Cup 2022 Day 12: All the major action and talking points
The FootballJOE Qatar World Cup 2022 Geography Quiz
From Ireland to Argentina: Alexis Mac Allister's Irish roots explained
France demand FIFA change result of World Cup defeat over 'rule break'
Cristiano Ronaldo 'agrees £173m-a-year deal' with Saudi club
"Nowadays, even if I don't hit a ball, I don't care as long as we win" - Gleeson learning from the past
Castleknock's Warnock the hero as Maynooth win first ever Ryan Cup final
You may also like
7 years ago
VIDEO: Ultimate facepalm as player caught saying woman is beautiful into microphone at press conference
7 years ago
VINE: Basketballer plays on like a boss despite dropping pants collecting rebound
7 years ago
VIDEO: Jesus hangs up on college basketball coach looking for advice on next opponent
7 years ago
VIDEO: College basketballer ejected for a reckless forearm smash to the face
7 years ago
Video: Haymakers thrown and refs toppled during women's basketball brawl
6 months ago
Your guide to a packed weekend of sport and how to watch it all
Next Page