For anyone who watched 14 hours of NFL action back-to-back, on Sunday, it will be best remembered for the individual performance that will surely pass through the years to become legend. Welcome to Big Play Taysom Hill Day!

We got the run-down on that, a couple of surprise results, and more, from David McDonnell of Smashmouting Football. 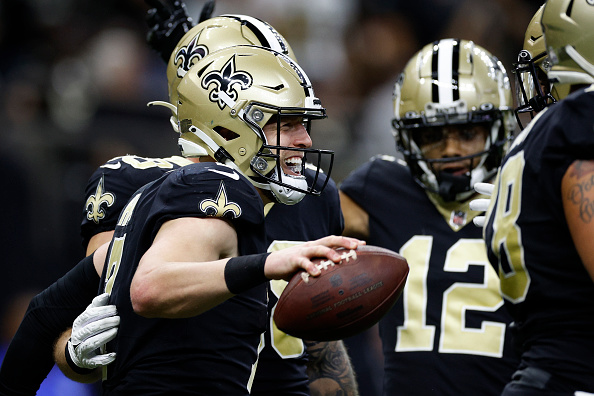 Taysom Hill #7 of the New Orleans Saints reacts after scoring a touchdown in the second quarter of the game against the Seattle Seahawks. (Photo by Chris Graythen/Getty Images)
Advertisement

END_OF_DOCUMENT_TOKEN_TO_BE_REPLACED

Taysom Hill - that all-action Swiss Army knife of a man - put on a display that could only be described as something a child might imagine in a fever-induced footballing day-dream such was its absurdity.

Hill has long been one of the unique stars the NFL has ever seen and we have seen him display his toughness and football aptitude in a multitude of roles. Yesterday, we got to witness his full repertoire of skills in a single game as he led the Saints to a most entertaining 32-39 victory against Seattle in the Superdome.

Pay attention because you will probably have to read this twice.

Against the Seahawks, and despite playing second-fiddle in snaps to teammate Andy Dalton, Hill threw a touchdown pass, blocked for his QB partner throughout, returned three kicks for 69 yards, recovered a fumble on special teams and also rushed for 112 yards on nine carries for three rushing touchdowns.

This game was a highlight reel in itself and started with a bang, when Geno Smith continued his explosive form of recent weeks by finding DK Metcalf, who bullied his way into the endzone for an opening quarter 50-yard touchdown.

DK Metcalf dancing while coming in motion and then scoring a TD lmao. Alpha pic.twitter.com/XncBrDZmE2

Taysom Hill responded to tie the game 10-10, when he snapped the ball in a wildcat formation and ran in from close range. He had his second TD of the day soon after when the Seahawks punter Michael Dickson had what I can only assume was a trick play gone bad. Why he still didn’t kick the ball, I’ll never know.

Hill with the fumble recovery pic.twitter.com/ABWiK6egEr

Before half time Geno found Tyler Lockett with a long ball with six seconds left in the half. The third quarter continued in all action fashion when a Denis Allen challenge resulted in a TD for rookie Chris Olave. This was followed up when Hill threw to tight end Adam Trautman from 22 yards to give the home team a 19-31 lead.

The contest already on fire caught further ablaze when the Seahawks battled back to take a late lead when Geno found Lockett once again over the top for a very similar TD pass to his earlier throw to his receiver. Seattle’s rookie running-back Kenneth Walker then tore through to leave the Seahawks leading 32-31.

Then came Taysom’s coup de grace when he broke cover and swept home from 50 yards for the winning score as the New Orleans crowd were once again brought to their feet.

Taysom is running up that Hill to victory pic.twitter.com/bmsLRYrCD4

Taysom Hill has been known in his career as a jack of all trades, the man who can do it all. Well, yesterday he did it all!!!

The late-late show on Sunday night, the hometown Ravens were the better side for most of the contest and they took a 0-10 lead when Lamar Jackson and his favourite target tight-end Mark Andrews teamed up for their 26th touchdown in the NFL.

In the second quarter, the Bengals got their hands on the ball when Von Bell intercepted after an errant throw by Jackson and Joe Burrow led his team up the field and extracted the maximum damage, when he found Hayden Hurst for a TD.

Incredibly, the Bengals haven’t conceded a touchdown in the second half of any game this season and then did their party trick once again in Baltimore. Burrow levelled the game once again in the fourth quarter with a QB sneak and Evan McPherson’s PAT, which flew over the post, was correctly given for a late one-point lead. 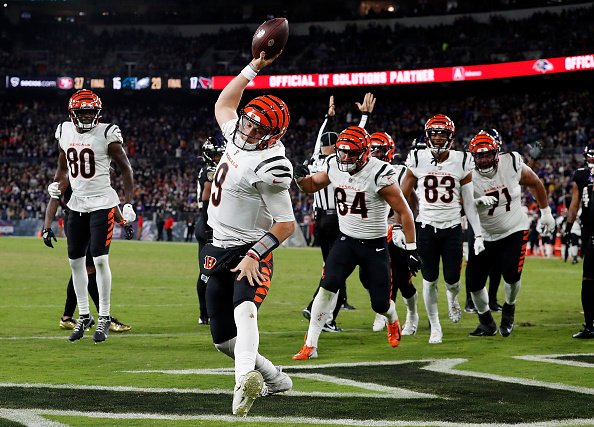 Joe Burrow #9 of the Cincinnati Bengals reacts after rushing for a touchdown against the Baltimore Ravens. (Photo by Todd Olszewski/Getty Images)

However, a converted field goal with the last kick of the game from the best kicker in NFL history; Justin Tucker, sealed a first home win in six games for the Purple and Black on a scoreline of 17-19.

On a day of big plays, the Browns and the Chargers battled it out in a score-fest in Cleveland in a game that saw the lead change five times.

The home side raced into a 14-point first quarter advantage when Jacoby Brissett found Amari Cooper from 12 yards, after Nick Chubb continued his very impressive start to the season with an eye-catching touchdown run.

The Chargers rushing attack was to the fore with running backs Joshua Kelly and Austin Ekeler both adding six-pointers and for the latter, it was his fifth touchdown in his last six quarters of football. Chubb responded again and Kareem Hunt got in on the rushing touchdown party as the Browns took a one-point lead into the fourth quarter.

Inside the last three minutes, Browns QB Jacoby Brissett was intercepted and the short field allowed the Bolts to kick a field goal to make the score 30-28.

Cleveland had a kick to win it at the death, but Cade York’s effort from 54 yards trailed right and wide to ensure the win for the visiting LA franchise.

*For more on Kyler Murray's ill-judged slide, the Eagles going 5-0, the Cowboys roughing up the Rams and the rest of Week 5, check out Smashmouting Football, and give them a follow on Twitter.


popular
Talksport presenter puts Martin O'Neill to the pin of his collar over Declan Rice and Jack Grealish
Rory McIlroy explains 'falling out' with Shane Lowry that lasted a few years
Roy Keane scores winning goal past Micah Richards in ITV v BBC pundits match
World Cup Power Rankings: The top 10 players at the tournament ahead of the quarter-finals
Gary Neville sticks up for Ronaldo as contextless pictures and videos taken as gospel
"There's no soccer, hurling, or rugby" - Kilcoo's secret to success
World Cup Power Rankings: The top eight pundits of the tournament so far
You may also like
1 month ago
Tom Brady’s year goes from bad to worse as 49ers get themselves a true baller
1 month ago
Bill Belichick makes big quarterback call as Justin Fields win it for Chicago Bears
1 month ago
Fan chooses poor time to approach Roy Keane at NFL London
2 months ago
Patrick Mahomes upstages Tom Brady to end controversial NFL week on a high
2 months ago
Miami Dolphins quarterback allowed to continue despite disturbing footage after head knock
6 months ago
Your guide to a packed weekend of sport and how to watch it all
Next Page