And we thought the Formula One finale was dramatic.

After opening drives from the Buffalo Bills and Kansas City Chiefs at Arrowhead, on Sunday night, we knew exactly what to expect. Pat Mahomes and Josh Allen were shooting from the hip and pulling off stunning plays.

Both quarterbacks executed drives that mixed in rushing, dead-eye passing, improbable connections, mazy carries through forests of legs and flailing arms and split-second brilliance. Allen went first and the Bills led 7-0. Mahomes got the ball and the Chiefs responded to make it 7-7.

END_OF_DOCUMENT_TOKEN_TO_BE_REPLACED

Over two hours later and it was still going on. Both defences stepped up for the rest of the first half and allowed only one more touchdown apiece. The third quarter saw the Chiefs go 23-14 ahead, thanks to three field goals, but Allen sniped back with another touchdown pass and it was too close to call. Again.

And then came a fourth quarter few of us have ever witnessed the likes of before. 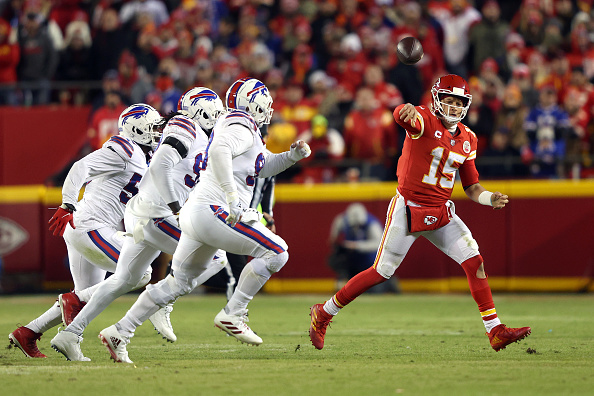 Pat Mahomes #15 of the Kansas City Chiefs throws a pass against the Buffalo Bills in the AFC Divisional Playoff game at Arrowhead Stadium. (Photo by Jamie Squire/Getty Images)

END_OF_DOCUMENT_TOKEN_TO_BE_REPLACED

Kansas City - seeking to reach their fourth AFC Championship in a row - kicked another field goal to go 26-21 ahead, in the forth quarter. So it remained until there was 1:55 left on the clock.

The frankly unstoppable Gabriel Davis ran a hard and straight line, then cut inside to the end-zone and swivelled to take an Allen bullet as he was falling back. The Bills went for the two-point conversion, got it and led 29-26.

Mahomes took all of 35 seconds and a couple of downs to find Tyreek Hill, who then turned and scorched in a touchdown from 50 yards out. The home fans went wild. The Chiefs led 33-29 with a minute to play. It was far from over.

END_OF_DOCUMENT_TOKEN_TO_BE_REPLACED

Allen found Davis, Davis again and Sanders on a drive up the field that Kansas were powerless to stop. Then, with 13 seconds left, he connected with Davis for the fourth time that night [a playoff record]. The extra point sailed over and the Bills led 36-33.

Pat Mahomes had 13 seconds to keep his team alive. Starting off at the 25-yard line, he did just that.

On his two shots at getting his team into field goal range, Mahomes found Hill and Travis Kelce. Harrison Butker, who had missed two earlier kicks, landed the game-tying field goal from 48 yards and it was off to over-time.

Then came a game-defining call as the Chiefs won the toss. They would get the ball and the first chance to score. If they did, it would be game over.

And was it in any doubt, at that stage? The way those two quarterbacks were slinging, there was none. Mahomes found Kelse with a lofted pass and it was finally over - 42-36 to the Chiefs.

The Chiefs march on to the AFC decider against the Cincinatti Bengals, next Sunday. Josh Allen and the Bills are left to reflect being on the losing side in an all-time classic.

In fairness to Allen, he did not gripe about the overtime rules that state the team that win the coin toss can end the game if they score on their possession. He commented:

"The rules are what they are, and I can't complain about that 'cause if it was the other way around, we'd be celebrating, too. So, it is what it is at this point. We didn't make enough plays tonight."

"It was tough to be in that moment," he added. "Again, I have a lot of respect for Pat - he throws the winning touchdown, and he comes straight over and finds me. To be in that situation and to do that, that was pretty cool of him to do that. Obviously, it sucks the way it happened... It's tough to take in, but it's part of the game."

.@PatrickMahomes left the celebration and ran across the whole field to find @JoshAllenQB.

End of the road [this year] for Brady and Rodgers

That Sunday night game was the cherry on top of a wildly entertaining playoff weekend.

It all kicked off with the Bengals edging out the Tennessee Titans 19-16 in a sack- and interception-filled game. Having not won a playoff game in three decades, Joe Burrows and the Bengals are now a win away from the AFC Championship.

In the NFC, the San Francisco 49ers stunned the No.1 seed Green Bay Packers 13-10 at Lambeau Field. In snowy conditions, this one was settled by a field goal again - Robbie Gould getting the last-gasp winner. That could be the last time we see Aaron Rodgers in the green and yellow of the Packers.

Tom Brady stunned the world, last year, by winning the Super Bowl with Tampa Bay at the age of 43. One year on, folks are wondering if he will finish up now that the Buccaneers could not finish off an incredible comeback against the Los Angeles Rams.

The Buccs trailed 27-3 at half-time but rallied to level the scores at 27-27, deep, deep into the fourth quarter. There was still time, though, for Rams quarterback Matt Stafford to find Cooper Kupp with a huge throw, and for another winning field goal to settle matters.


popular
Ireland team to play Wales: Andy Farrell's XV, the big calls and bold cuts
Jaden Sancho can't hide his smile as Old Trafford give heartwarming reception
Discontent over Netflix access for Six Nations documentary as Johnny Sexton focuses on his Last Dance
Everton release brutal 59-word statement to confirm Anthony Gordon departure
"Every team did it!" - Paul O'Connell on Roy Keane comment to Ronan O'Gara that he couldn't deny
Owen Farrell praises Johnny Sexton in revealing interview ahead of Six Nations
"It's crazy to think Bundee Aki might come straight in and start against Wales"
You may also like
2 months ago
Patrick Mahomes shows young pretender how it's done in thrilling Chiefs comeback
2 months ago
Josh Allen and Buffalo Bills left stunned by 'greatest catch in NFL history'
2 months ago
NFL round-up: Patrick Mahomes the hero and Kirk Cousins living his best life
3 months ago
Tom Brady’s year goes from bad to worse as 49ers get themselves a true baller
3 months ago
Bill Belichick makes big quarterback call as Justin Fields win it for Chicago Bears
3 months ago
Taysom Hill puts together one of the most absurd performances in NFL history
Next Page