Earlier this year O'Connor was arrested for using cocaine in a Paris drug-bust in which former All Black Ali Williams was also charged with purchasing the drug.

O'Connor may have escaped a fine from the French Top 14 disciplinary committee and returned to playing with Toulon, but his public image in his homeland isn't in great shape following the controversy. The likelihood of him going back to Australian rugby is slim, but in the South of France, he still has some adoring fans. 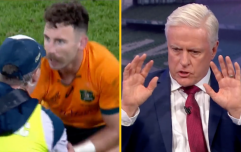 END_OF_DOCUMENT_TOKEN_TO_BE_REPLACED

Following his side's win over Pau on Saturday, O'Connor repaid one of these loyal supporters with a lovely gift. He presented the young fan with his boots from the game, to which the child reacted with a mixture of shock and joy.

Check out the touching moment in the video embedded below.


popular
Roy Keane reacts to Brazil's jubilant celebrations in first half demolition job
World Cup 2022 Day 16: All the major action and talking points
Didi Hamann thought Brazil substitution was "disrespectful" to South Korea
Roy Keane handled Gary Neville’s goal celebration as most Irish fans would
Portugal boss could strip Cristiano Ronaldo of captaincy
Rory McIlroy explains 'falling out' with Shane Lowry that lasted a few years
World Cup 2022 Day 17: All the major action and talking points
You may also like
5 years ago
David Pocock makes simple upper body exercise that most people could never do look easy
5 years ago
Leinster have reportedly signed an Australian international... and he's a flanker
6 years ago
Michael Cheika respects Ireland too much to indulge in English coach's tactics
6 years ago
Ireland have been dealt a major double blow ahead of clash with Australia
6 years ago
Josh van der Flier lays down fearless marker for start against Aussies
6 years ago
Rugby community rallies behind Christian Leali'ifano after leukaemia diagnosis
Next Page