No late changes to the Irish line-up after Thursday's team announcement dramas.

Ireland's third, and final, training session of the week ended without any more players pulling up with injuries.

Ireland assistant coach Simon Easterby looked a relieved man as he confirmed that the 23 players selected to face France, yesterday, will be fit to line out on Saturday at Stade de France.

Given the fact that Rob Kearney and Sean O'Brien are back from hamstring tweaks and Andrew Trimble and Johnny Sexton sat out training midweek, the clean bill of health is just wanted Joe Schmidt wants to hear. 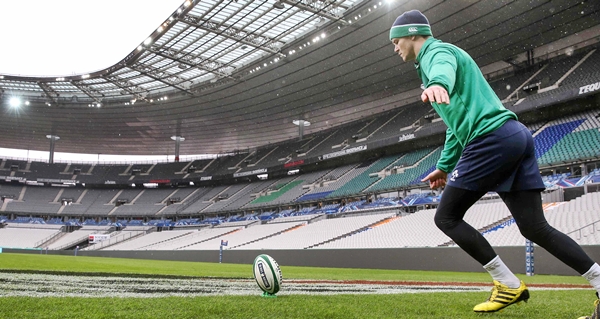 END_OF_DOCUMENT_TOKEN_TO_BE_REPLACED

Ireland captain Rory Best addressed the media at this morning's press conference, after his team's run-out in rainy Paris.

The Ulster hooker was keen to point out that, despite finishing a winner at Stade de France in 2014, his early days against Les Bleus were torrid. He was not lying - Best was on the losing side in six of his first seven Tests.

END_OF_DOCUMENT_TOKEN_TO_BE_REPLACED

Ireland are unbeaten in five against France, at present, yet they go into the match as slight underdogs. That could be perhaps the Irish scrum struggled so badly against Wales last weekend.

Best is keen for Ireland to lay down an early marker and declared, "It is important that we start this game pushing forward."


popular
Mario Balotelli, Luis Suarez, Fernando Torres and why Rio Ferdinand "hated them"
"I remember just hugging this Irish guy" - How one Kiwi rugby star reacted to Ireland's historic series win
"I don’t trust you" - Joey Barton delivers brutal dismissal of Irish defender
Down county football is in tatters, but Conor Laverty is the man to piece it back together
"I'll ask for everyone that comes to the game to wear purple and roots for us" - Pat Fitzgerald
Gatecrashed interviews and chip-shop previews - Wexford GAA's online coverage sets the standard
Javier Hernandez offers to play for Manchester United for free
You may also like
1 week ago
“My confidence was on the deck" - Aaron Connolly explains why he has made the move to Italy
2 weeks ago
Every Irish transfer in football, this summer, as several big deals get done
2 weeks ago
The Top 20 rugby players in Ireland, right now
2 weeks ago
Six Irish players make damn impressive 'World XV' that would take some beating
3 weeks ago
The frontrunners for Ireland's 33-man squad for the 2023 World Cup
3 weeks ago
All Blacks media manager explains why Ian Foster appearance was cancelled after Ireland defeat
Next Page