"He's human, but that's what happens."

In the aftermath of Leinster's 24-21 Champions Cup final defeat, an Irish rugby supporter spotted Wayne Barnes in a hotel, not far from the Stade Velodrome, in Marseille.

Not seeking to ruffle any feathers, we were later assured, the supporter approached the Englishman, who had refereed the game, and sought an explanation for some of his penalty calls. "In fairness to Wayne," the fan admitted, "we were talking for 10 minutes, and he had a good explanation for each."

END_OF_DOCUMENT_TOKEN_TO_BE_REPLACED

That was just one interaction for Wayne Barnes after a fiercely contested final. One wonders how often he gets approached like this, after games, and asked to talk through his big on-field calls. Far too much for his liking, is our guess.

Following Leinster's loss to La Rochelle, there were two areas of focus, concerning Barnes. The first was whether he could have yellow-carded a La Rochelle player, earlier in the game, when they looked to be infringing to give away penalties whenever Leinster got close to, or into, their 22.

The other revolved around a near 10 minute stretch at the end of the match, where the French side put Leinster under enormous pressure and forced multiple penalties. While La Rochelle fans were baying for a Leinster yellow card, fans of the Irish province reckoned at least two scrums calls went against them.

On the latest House of Rugby URC [LISTEN from 5:05 below], Darren Cave, Jason Hennessy and Victor Costello discussed Champions Cup final, what La Rochelle did to disrupt Leinster and how Wayne Barnes make his presence felt. 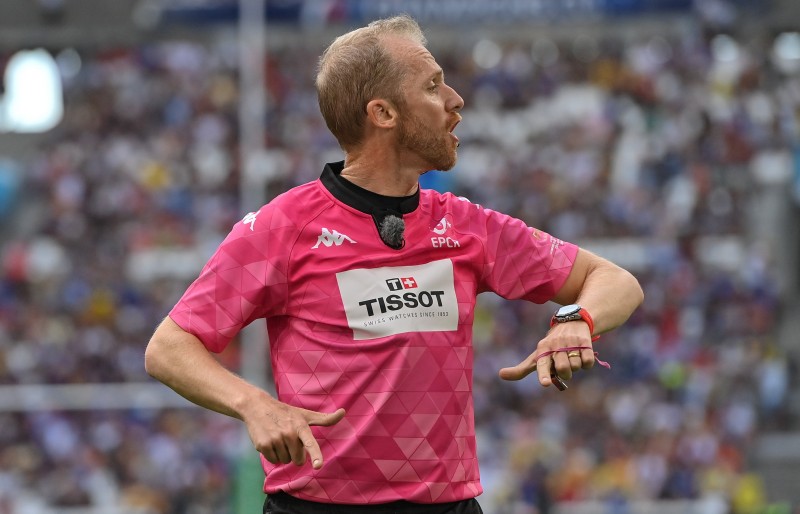 END_OF_DOCUMENT_TOKEN_TO_BE_REPLACED

To former Leinster back-row Victor Costello, the 800+ kilometre distance between West Coast and Marseille, in the South of France, was not enough to call the final anything but a home game for La Rochelle.

"On the hard turf, hard ground, 30 degree heat and Wayne Barnes, who is traditionally known as a home-town referee, if you were thinking this was going to be a walkover [for Leinster], then you were completely naïve," Costello proclaimed.

"This often seeps into a team, this level of expectation. Every dog in the street was expecting Leinster to win because they had these two- and three-second rucks, and all these expert opinions coming out of everywhere. And it may have been all very business-like in the Captain's Run, but there was no Plan B, out on the pitch.

"These 80 minute games can often fly by very quickly, and there are a lot of stresses. And when you have stresses, something often gives. So you ask, what gave for Leinster? If you look back, they had an easy run-in [to the final]. Munster really emptied Toulouse, over 100 minutes, Leicester and Connacht were walks in the park. They got down to Marseille, and it wasn't going to be a walk in the park, but why wasn't it a walk in the park?

"We all knew they'd try to slow down Jamison Gibson Park and tie down Tadhg Furlong in the scrum... and you throw in the Ronan O'Gara factor, where he sat there for two weeks looking at how to beat Leinster - slow them down and get a man over the ball. They did, and Leinster had no Plan B, so where was the leadership?"

Costello felt La Rochelle opted to deny Leinster tries, or try-scoring chances, by being cynical. They flooded the midfield to try prevent the ball going wide. If Leinster make a line-break, or got momentum, the French side conceded a penalty - giving up three points, at worst, instead of a potential seven.

Victor Costello on what went wrong for Leinster and how @RonanOGara10 had them figured out.👊

Wayne Barnes in the closing stages

Jason Hennessy pointed out how, at 18-10, Leinster 'thought they were cruising' by taking the penalties on offer. With Thomas Lavault also in the sin-bin, until the 74th minute, they were almost home and hosed.

La Rochelle had been conditioned to believe the match was there for the taking if they were still in touch, going into the final quarter. They took advantage of some sloppy Leinster play, camped inside their half and Wayne Barnes started to side with them on penalty calls.

"This is your pre-study with Wayne Barnes," noted Victor Costello. "If he gives your four straight penalties in the first half, you know he's going to end up giving them back in the second!

"That's what happens, and so it was. There were stupid 50/50 calls that were penalties [to La Rochelle]. But that's what he does.

"It's like he goes in at half-time, and someone says, 'Hey, Wayne, you're doing well but you need to even it up a little'. He's human, but that's what happens. There were a few stupid calls that went Leinster's way in the first half that went against them in the second."

One big call that irked Leinster fans was on 73 minutes, with the four-time champions leading 21-17. Replacement tighthead Michael Ala'alatoa and Dan Sheehan forced the La Rochelle front row to pop up, right under the nose of Barnes, but play was allowed to go on.

Leinster would eventually be penalised for an offside call, by Barnes. They would never really get out of their 22, as they had four penalty advantages to play out before Arthur Retiere got the game-winning try, five minutes later.

"We had a couple of great scrums which could have gone our way," Leinster captain Johnny Sexton would ruefully reflect.

There was nothing glaring that lost Leinster the game, though. It was death by a thousand cuts, whistles, niggles, carries and plays.

Some players did not bring their 'A' or 'B' games, the opposition were successfully cynical, Wayne Barnes gave, then tooketh away, Will Skelton and Gregory Alldritt were both immense, the heat affected Leinster more, and the La Rochelle support were inspiring to their team.

There was the weight of expectation, too. In the cold light of day, that may have been the ultimate, deciding factor.