WATCH: No-one else spotted who was really to blame for that "schoolboy" Stuart Hogg try

"That try will kill Andy Farrell."

20 minutes into Ireland's Six Nations opener against Scotland and the game was finely poised. The Scots had rocked Ireland with an early try but were getting mashed in the scrum. Ireland had plenty of possession but were squandering good positions and the lineout was shaky.

20 minutes and 30 seconds in, the game was turned on its head.

END_OF_DOCUMENT_TOKEN_TO_BE_REPLACED

Scotland went two phases off their cleanly taken lineout and they were in - Stuart Hogg made to look untouchable by a hesitant Irish defence. 14-0 down and in an almighty hole.

At first glance, it may have seemed as though Rob Kearney and Keith Earls had their wires crossed when trying to cope with Stuart Hogg and Sean Maitland.

However, as pointed out by Kevin McLaughlin on The Hard Yards, the try was sparked by Paddy Jackson jumping the gun and getting drawn in by Finn Russell. McLaughlin said:

"It was good lineout ball and a hit-up up the middle, then really slow ball - about three or four seconds - before they spin it out left. Hogg and Maitland hit the line at pace and Russell throws a really good pass but the Irish team were numbers up.

"I think Paddy Jackson turns his shoulders in. It meant Earls had to turn his shoulders in as well, which is what you do in a defensive line, and then Hogg just got on the outside of Earls. Rob had to stay out on his man and that's what he did. You can't give Hogg an inch of space; he's that good.

"I still thought Earls might have scragged him down but they're the margins. Andy Farrell will be really disgusted with that try; it was too simple."

This is how the Irish defensive line looked as the second phase kicked off [Jackson is circled yellow]: 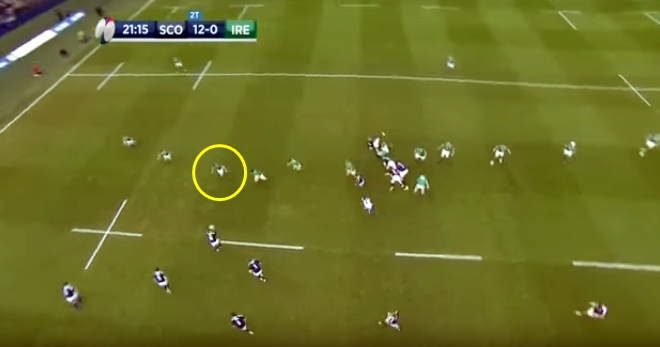 Huw Jones receives a pass from Russell and, sensing an Alex Dunbar carry, Jackson bites in. In doing so, he forces Earls to do likewise. When Jones spins his pass, Earls is now on the back-foot and has to readjust to go in pursuit of Hogg. 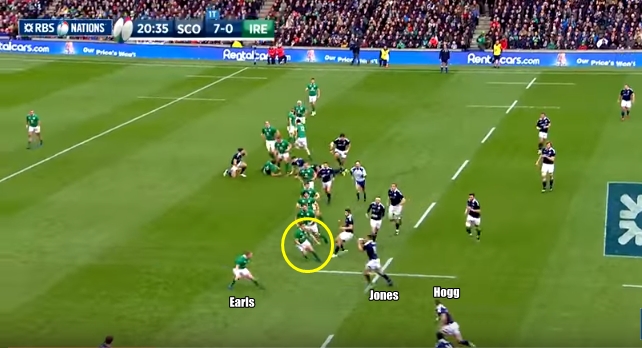 Maitland steams up the left wing and gives Hogg the passing option. Kearney trusts that Earls will get his man and turns his body to cover Maitland. It is now up to Earls ans whether he backs his pace...

Earls' chance to take Hogg is when he feints to pass. It's split-second stuff but it slows him ever so slightly. It is already too late, however, as Earls has opted for the desperate dive that does not work. 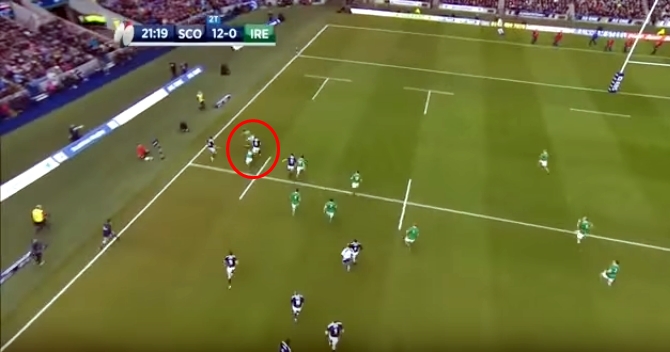 With that, Hogg is away. Jackson trails in behind him. 12-0 down and the man that tipped the first domino.

While the Ulster outhalf will come in for a harsh critique in the video reviews on Monday morning, Donncha O'Callaghan told Hard Yards host Andy McGeady that several players could have done so much better. He said:

"I'll be honest with you, at international level, to score off pretty much two phases is nowhere. Five-man lineout, they hit Josh Strauss up, one skipped pass and they score in the corner. If it happened in a schoolboy's game, they'd be really disappointed with it.

"International rugby and it is seven points given away. That is the one that is going to kill [Ireland defence coach] Andy Farrell. It's going to kill all the players.

"You work on your systems and who goes where. Who goes around the corner after your midfield hit. But, as Joe Schmidt said, they were passive. Strauss makes gainline on that carry and Ireland were slow to set. That was a really bad score to concede... we looked a little all over the place in that first half."

Check out the try below and judge for yourself.