Brought to you by TV3.

All professional players get nerves before a big game but you would think that a man of John Hayes' dominating stature wouldn't be susceptible to nausea.

The Cappamore man infamously got sick before that famous game against England in Croke Park but that didn't stop him from putting in a brilliant display that helped Ireland to a historic victory.

However, Hayes recalled on the The Clubhouse on TV3 last Tuesday that this wasn't a one-off occasion, it was something which plagued him throughout his career.

"From matchdays it would have been (a regular occurrence).

"All the hydration protocol I would have gone through beforehand would have been gone and I'd have to start again!"

Hayes reveals that it could come about just minutes before kick-off.

"Just minutes, sometimes even just getting onto the pitch, it could go as close as that."

Gordon D'Arcy who was also on the show adds that the sight of Hayes in the toilets before a match was a familiar sight.

"Sometimes you would be going into the toilet yourself and you would see the two feet sticking out!

"You would just see the boots because he is on his knees!" 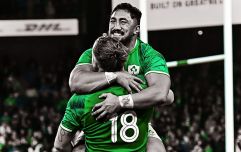 END_OF_DOCUMENT_TOKEN_TO_BE_REPLACED

Also on the same show, Hayes admits to getting revenge on Peter Stringer because the scrum-half built a snowman in his bedroom.

Hayes stuck to what he knew best and went out into the night in search of a sheep....which he ushered into the Corkman's bedroom!

The Clubhouse will be back with a Champions Cup Special on Tuesday the 18th of April at 10:30pm on TV3.

Brought to you by TV3.


popular
From Canada to Carlow in the name of hurling: Nicolas Redmond's journey to the Fitzgibbon Cup
Kerry's captain selection for 2022 sums up the problem with their outdated system
"It must be difficult to say no, having won a game and heading back together"
Eddie Jones shares great tale on hour-long chat with 'inspirational' Roy Keane
Jesse Lingard 'angered by lack of respect' shown by Man United
Chelsea forced to change Stamford Bridge changing room after Liverpool complaint
Roy Keane has heaped praise on Trent Alexander-Arnold
You may also like
4 days ago
"I saw a skinny boy from Ireland, standing in a big goal" - Jurgen Klopp praises Caoimhín Kelleher's development as a goalkeeper
6 days ago
Predicting Ireland's starting XV for Wales after Andy Farrell squad announcement
6 days ago
Jamie Heaslip delivers Jack Carty reality check, hours before Ireland call-up
6 days ago
Several exciting backs included in Ireland squad for 2022 Six Nations
1 week ago
'To hear people talking about Ireland, it obviously gives you confidence' - Conor Oliver
1 week ago
Craig Casey and four Leinster stars feature in French scouting report for Six Nations
Next Page