Ireland looked to come good against minnows Russia in Kobe.

Ireland came into the match with their backs to the wall following an upset loss to hosts Japan in the previous game. As a result, this tie turned out to be a must win for the Men in Green, a spot in the last eight was on the line.

The Irish have beaten the Russians on the two previous occasions that these sides have met and today would serve to be no different.

Kick off followed and Ireland were expected to make a fast start and they certainly didn't disappoint. Barely two minutes into the game and the Irish had planted their flag past the Russian try line thanks to Rob Kearney. The fullback cut through a gap after a smart pass before shrugging of Denis Simplikevich to score. Johnny Sexton grabbed the extras. Ireland did well to exploit the numbers at the breakdown and 7-0 it stood just two minutes in.

90 - @IrishRugby have scored their quickest (90s) ever @rugbyworldcup try (previous best @AlanQuinlan1 v Namibia 2003) and the quickest try by any side at #RWC2019. Eager. #IREvRUS pic.twitter.com/hAZSGjBx8A

13 minutes in and Ireland continued to inflict damage with another try. Johnny Sexton demonstrated astuteness to spot space behind the Russian defence before sending a slick grubber for Peter O'Mahony who crossed over to land just his second international try. Sexton secured the conversion with the scoreline reading 14-0.

28 minutes in and Ireland made a change as CJ Stander came on to cover the back line in place of Jordie Murphy. 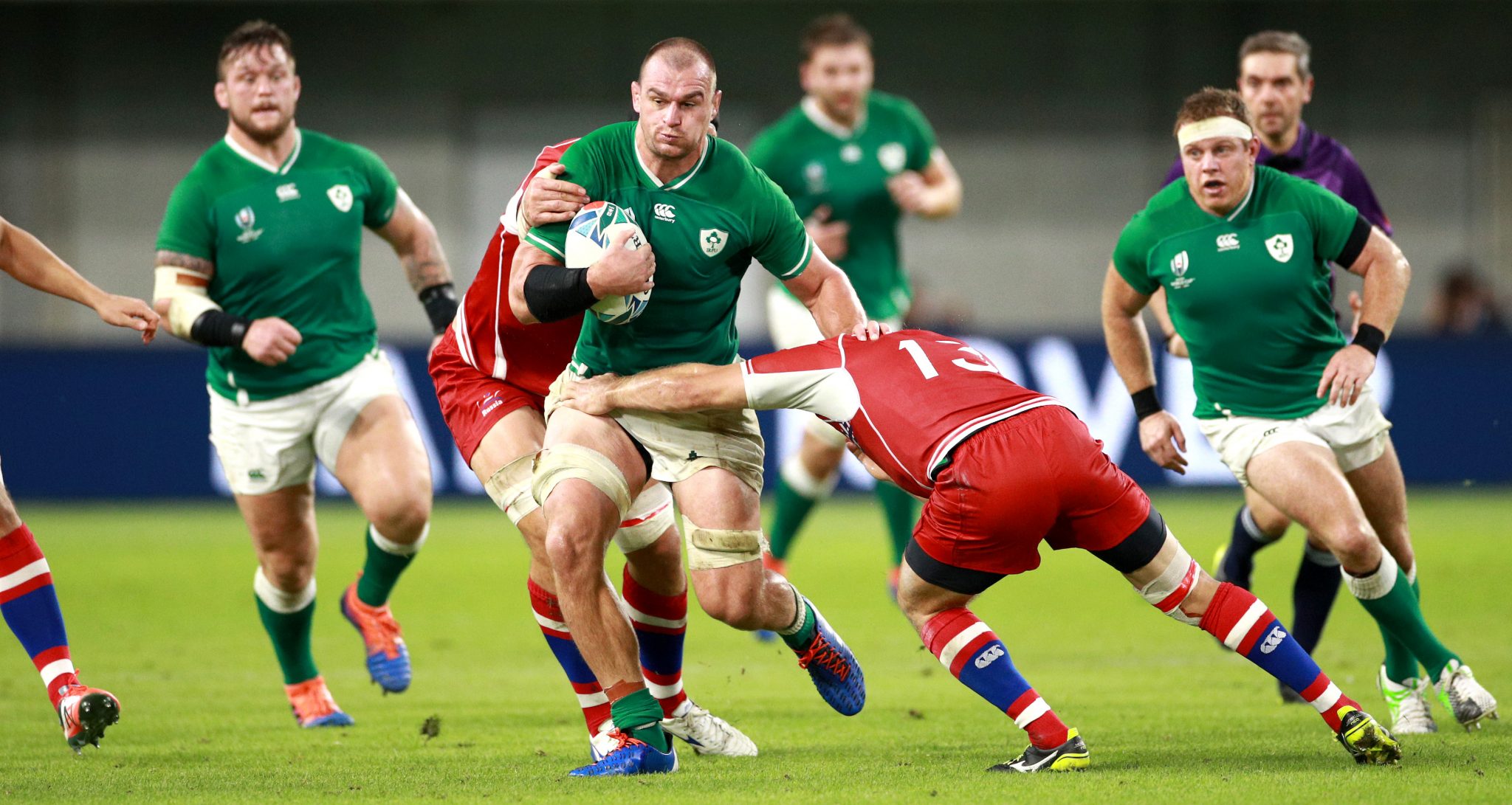 END_OF_DOCUMENT_TOKEN_TO_BE_REPLACED

33 minutes in and Bogdan Fedotko was sin-binned as Russia conceded a penalty and had to finish the half a man down. Ireland quickly took advantage with a try seconds later; Rhys Ruddock was the man responsible with a powerful shove from John Ryan to help. Sexton grabbed the conversion for a score of 21-0.

Halftime arrived and the stats showed that Ireland were bossing the possession with 67% and having 225m made to Russia's 64m.

As the second half began, Johnny Sexton found himself substituted for Jack Carty with fans unaware whether the change was of tactical or medical nature.

51 minutes and Andrey Ostrikov became the second Russian player to be sin-binned for a tackle to John Ryan's head. 57 minutes in and Russia were awarded a penalty and Ramil Gaisin stepped up and missed as the ball ended up the left of the posts.

Entering the final quarter, Ireland scored their fourth try of the night and landed their bonus point in the process. Carty chopped a sweet kick over the top which was collected by Keith Earls who then passed to Andrew Conway who streaked past the line to score. Carty then converted for a commanding lead of 28-0.

Despite the scoreline, Russia had played well, putting in a 142 tackles and missing just 10% of those.

Five minutes before fulltime, and the Irish grabbed their final points of the game with another converted try. Jordan Larmour sped away to find Earls who returned the favour to Larmour who flipped the ball to Gary Ringrose who strolled past the line for a final scoreline of 35-0.

Speaking to the BBC after the game, Ireland fly-half Johnny Sexton said:

"We are delighted to get a good win and back on the horse and we got the bonus point which was what we were looking for. They are a well organised team and made it difficult for us at times. The ball was very slippy and there is lots to work on but we are onto the next one against Samoa."

"We were maybe a little bit loose with the ball at times in really greasy conditions. Samoa will be tough and I know how humid it is there, so they are a little bit more accustom to these conditions than we are."

Ireland got the job done with a bonus point but in terms of a morale booster, they left more to be desired and in all honesty, they don't look to be operating on the same wavelength as the All Blacks who seem desperate to keep their crown. Only time will tell.

The @Mastercard Player of the Match for #IREvRUS was Rhys Ruddock! #POTM #StartSomethingPriceless #RWC2019 pic.twitter.com/rLJJNz1kff

You may also like
4 days ago
"Paulie was like Casper the Ghost... he had lost about two stone in the two days"
5 days ago
You'll be hard pushed to get full marks in this Serie A quiz
5 days ago
Nigel Owens on how the O'Driscoll and O'Connell captaincy dynamic worked
5 days ago
Tadhg Beirne on the Wayne Pivac request that helped change his career
1 week ago
Baz & Andrew's House of Rugby - Tadhg Beirne and John Cooney
1 week ago
'We knew how much it meant to them' - Conrad Smith on Croke Park history lesson
Next Page