On the back of Worcester Warriors being suspended from all club competitions, losing players and staff and looking set for relegation to the Championship, Wasps have announced the club is going into administration.

The English Premiership side, who have players on their books like Joe Launchbury, Vincent Koch, Jack Willis, Dan Robson and Ireland prop John Ryan, released a statement today that confirmed their upcoming league clash with Exeter Chiefs was not going ahead.

"In light of the current situation," a statement read, "we have therefore taken the decision to withdraw the Wasps Men’s team from this Saturday’s league fixture against Exeter Chiefs." 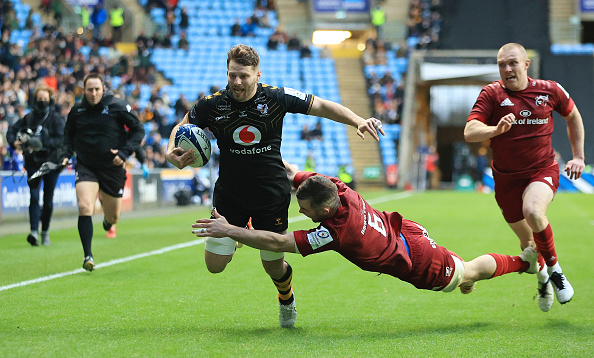 'This was an extremely difficult decision to make'

“Negotiations to secure deals that will allow the Men’s and Women’s rugby teams, netball team and the arena and associated business to move forward are ongoing. However, it has become clear that there is likely to be insufficient time to find a solvent solution for the companies within the group, and it is therefore likely that they will enter into administration in the coming days with a view to concluding deals shortly thereafter.

“While the companies within the Group all represent strong and viable businesses, the reality is that they have insufficient cash at this time to continue to fund operations until these complex negotiations have concluded. We have therefore been asking potential funders and investors to provide bridging finance to provide enough time for a solvent solution to be found. Regrettably, this has not been possible to date, although we will continue to pursue this until the very last opportunity.

“In light of the current situation, we have therefore taken the decision to withdraw the Wasps Men’s team from this Saturday’s league fixture against Exeter Chiefs. This was an extremely difficult decision to make and we recognise that this will not only impact on our players, staff and supporters, but also Exeter Chiefs and the wider rugby community. However, we strongly believe it is the right course of action when, at this time, we are unable to meet our regulatory requirements in the absence of fully concluded deal negotiations.

“We understand that this news will be disappointing and concerning for everyone involved. Our immediate focus will be on ensuring that all of our players and the staff of Wasps and the arena are fully updated and given the support they need.

“While these are challenging times, we remain confident that new owners will be found that will allow the clubs and businesses within the Group to move forward. We will not be making any further statement at this time.”

Wasps are six-time Premiership champions and have won the European Cup on two occasions.

While Worcester Warriors are set for relegation, Wasps will be hopeful that it can address the most pressing issues at end to avoid a similar outcome.


popular
Sean Dyche set to be named Everton manager after Marcelo Bielsa talks break down
Roy Keane flatly rejects longstanding perception of ex-Man United midfielder Paul Ince
Allianz National Football League Round 1: All the action and talking points
Conor McGregor hit by car ‘at full speed’ while cycling
Roy Keane leaves ITV pundits in stitches after Pep Guardiola's pre-match interview
Quiz: Identify these 15 football clubs that are not named after a place
Study shows rugby positions you are most/least likely to be injured playing
You may also like
3 days ago
"He didn't give me that jersey back!" - Johnny Sexton on new rival Jack Crowley
5 days ago
Robbie Henshaw on his life-long friendship with Bundee Aki and Netflix documentaries
6 days ago
Munster get brutal Champions Cup draw as Leinster face Ulster in Last 16
1 week ago
“He's gonna be pi**ed when he hears this!” – Anthony Watson's Vegas trip with Tadhg Furlong
1 week ago
Kieran Treadwell the most unfortunate Ireland player to miss Six Nations call
1 week ago
Joey Carbery the biggest selection casualty as Andy Farrell gets ruthless
Next Page