Introducing four songs from each of the nations involved in the British & Irish Lions squad was one of several good notions Warren Gatland struck upon during his tenure as head coach.

The Kiwi came up with the idea of creating a choir within his 2017 touring squad as he felt it would help with team bonding and be a nice response to the 'powhiri' greetings they would get during their time in New Zealand.

It would also mean each nation would be representing an aspect of their own culture and ensured there would be no repeat of the specially commissioned lead balloon that was 2005's 'Power of Four'.

END_OF_DOCUMENT_TOKEN_TO_BE_REPLACED

That never really caught on with the public, nor the Lions players themselves.

In his book 'In the Line of Fire', Gatland notes that the players were separated into their four country groups and asked to nominate a song.

The Scots went for Highland Cathedral and the Welsh chose Calon Lan but it was not as straightforward for the Irish and English. Gatland recalls:

'The English boys chose Jerusalem. At one stage they were talking about Swing Low [Sweet Chariot] but I said, "I don't think that would be a good idea."

'I'm not sure if they were joking or not... The Irish lads went for The Fields of Athenry.'

'The boys from the north were a bit worried about having The Fields of Athenry, but that is what the Lions are all about - accepting differences and making compromises.'

The Ulster contingent of the squad included Ireland captain Rory Best and teammates Iain Henderson and Jared Payne. In the end, the Pete St-John song about the Irish famine - popular with both Munster and Connacht fans - got the nomination. It turned out to be very popular amongst the wider squad: 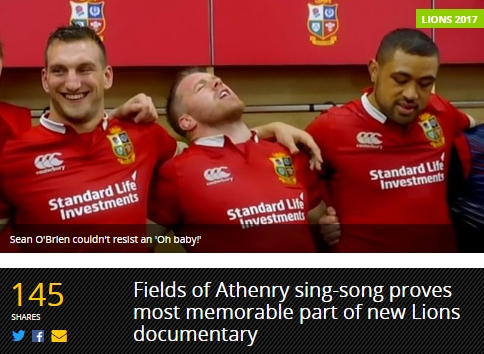 Lions captain Sam Warburton told The Hard Yards podcast that Ireland [and former Connacht] centre Robbie Henshaw was tasked with getting the entire squad up to speed.

"We had a great time singing those songs... a lot of the time it was off-the-cuff and we'd start singing after we had a great win or were having a meal out. It was one of the fun parts of the tour and was a real good team bonding exercise... reluctantly, from an Irish perspective, Robbie Henshaw was picked to lead the choir [for Fields] with Greig Laidlaw doing it for Scotland and Kyle for England... Ken Owens volunteered!

The first official airing of 'Fields' was in Kehoes pub, in Dublin city centre, a few days before the squad flew out to New Zealand for a Test Series they would ultimately share with the All Blacks.