Connacht trio Ultan Dillane, Denis Buckley and Niyi Adeolokun have all been named in Pat Lam's Barbarians squad to play in Sunday’s Quilter Cup Match against England at Twickenham.

Adeolokun has been named in an explosive back three alongside Toulon pair Chris Ashton and Josua Tuisova while Dillane will partner ex-Wallabies lock Sitaleki Timani in the second-row.

Meanwhile Denis Buckley has been named at loosehead prop alongside the experienced pair of Benjamin Kayser and former All Black and Ulster prop John Afoa.

Argentinian flanker Juan Martín Fernández Lobbe will captain the side from blindside flanker with head coach Pat Lam praising the 'high quality' individuals he thinks can challenge England this weekend.

“It’s an exciting challenge to bring together a side in five days but everything we’ve done has been about improving our chances of winning this game,” said Lam.

“We have very high-quality individuals – and they’ve worked hard and risen to the challenge of coming together as a team, which is what we’ll need to compete with a top class international side.” 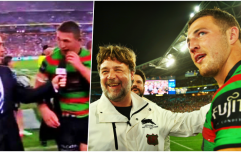 END_OF_DOCUMENT_TOKEN_TO_BE_REPLACED

You may also like
2 months ago
"F***ing hell, this guy is like James Bond. This is going to be amazing."
2 months ago
"Just to clarify, it was an accident" - Mike Brown on Conor Murray incident
2 months ago
Ben Youngs talks about Leicester Tigers' infamous Tuesday training sessions
2 months ago
Ireland's best try of the past five years wouldn't be allowed any more
5 months ago
Manu Tuilagi sees red as England clinch Triple Crown
5 months ago
"Ireland don't ever do anything different and that's the worry" - Mike Tindall
Next Page