This is such a class moment, and one that may bring a tear to your own eyes. Tupou Vaa'i delivered one hell of a Father's Day surprise for his old man, and the rest of his family.

From an early age, the Vaa'i family knew they had a special talent in their ranks. Growing up in Auckland, Tupou Vaa'i showed enough potential in club rugby that Wesley College had him in their First XV long before he was a senior.

The Paerata secondary school has a history of producing quality New Zealand backs, such as Jonah Lomu, Sitiveni Sivivatu, Malakai Fekitoa, Stephen Donald, Charles Piutau, as well as Munster fan favourite Casey Laulala. Their latest addition to the All Blacks ranks is a rangy lock that has impressed Ian Foster and his selectors in this unique 2020 season. 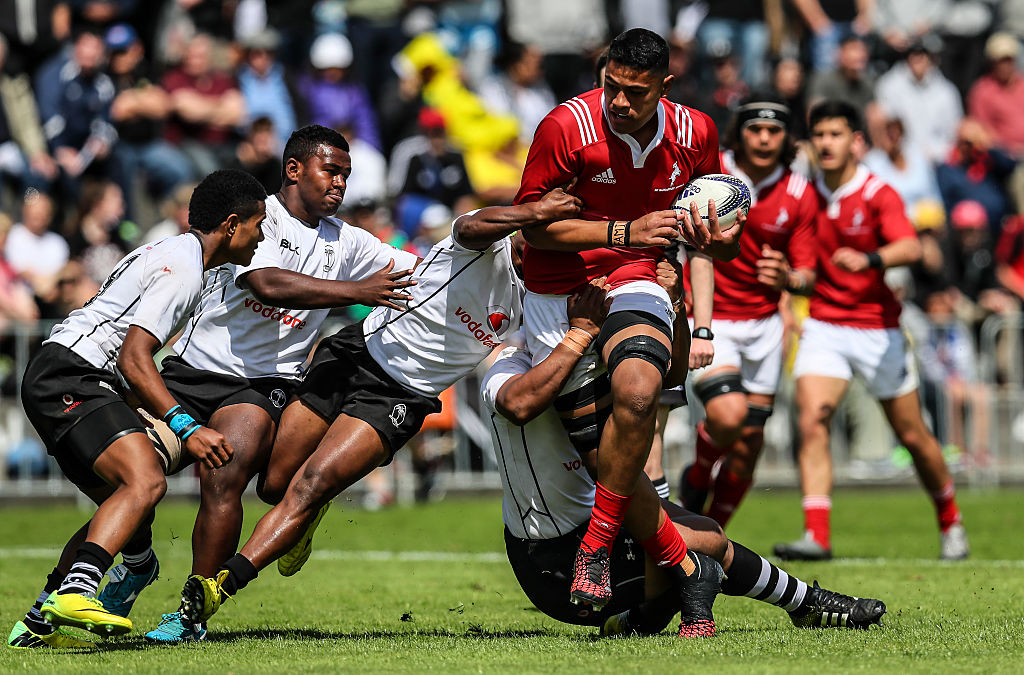 Four players attempt to fell Tupou Vaa'i, then aged 16, during a match between Fiji Schools and New Zealand Barbarians Schools at Auckland Grammar School in 2016. (Photo by Simon Watts/Getty Images)

Tupou Vaa'i stands at 6-foot-6 now, but he was not far off that mark when he made his first big impressions for the New Zealand Barbarians Schools selection. He was part of New Zealand's U20 squad at the junior world championships, in 2019, then returned home for a First XV run with Taranaki in the Mitre 10 Cup.

Chiefs head coach Warren Gatland drafted him into his squad for the 2020 Super Rugby, and then Super Rugby Aotearoa, competitions. Despite the Chiefs finishing rock bottom of the Super Rugby Aotearoa standings, Vaa'i did enough to get drafted into the North vs. South trial game, on Saturday.

The North vs. South fixture was a friendly in name only, as both sets of players went at it for 80+ minutes, knowing that spots in the All Blacks squad for their upcoming Test fixtures were on the line. The South clinched an absorbing match-up with this Will Jordan stunner [below] so Vaa'i ended up on the losing side again:

The South steal the victory after this 'gold standard' play from Will Jordan 👊#NorthvSouth pic.twitter.com/G4jltO8nTE

The 20-year-old lock's fortunes picked up significantly over the coming hours, however.

"As a young kid," says Vaa'i, "you always want to get in with the All Blacks.

"I got a phone call around 7:30 this morning [finding out I made the squad] and I think I woke up my room-mate, Beauden Barrett. So sorry about that!"

After letting Barrett know the good news, Vaa'i called home and broke the good news to his family, who were all gathered around the front room of their house for breakfast.

"I got some good news this morning," he began, before the tears came . Vaa'i needed a brief pause as the enormity of the moment sank in. Taking a breath, he continued:

"I just wanted to let you guys all know, I made the All Blacks squad."

"Growing up as a kid in New Zealand," Vaa'i later told Newshub, "you always wanted to be an All Black so this is very special. Today is Father's Day so it's probably the best gift I've given my dad."

Vaa'i was one of seven uncapped players called into Foster's squad for what rugby officials in the southern hemisphere hope will be a Tri Nations tournament that goes off as planned and possibly with supporters in attendance.

Fellow call-up Caleb Clarke also let his family know the good news but he got in a catch-up chat and wished his dad a happy Father's Day before 'seven or eight minutes in' letting them know he had made the squad.