Devin Toner had his ear burnt by the former Ireland captain down in Athlone.

Paul O'Connell made a beeline to his former second row partner, last week, when Ireland's senior and U20 teams met up at Buccaneers RFC's Dubarry Park.

Caked in mud, after a gruelling session, Toner commented:

"I've seen the blueprints of a Paulie lineout already, too!

"He was there today and I had a brief chat with him. He was asking me about body shape for one of the taller second rows at scrum-time."

END_OF_DOCUMENT_TOKEN_TO_BE_REPLACED

Always switched on. Always thinking about how to get better, and get these young men up to scratch.

Ireland U20 captain Tommy O'Brien has been blown away by O'Connell. "He's brilliant," O'Brien tells us.

"He's getting really involved and stuck in straight away. As soon as he came in he bettered us. He brought in a few things that he would have done as an international player and they have really helped our game as well."

O'Brien says O'Connell has held back on the pre-match speeches, for now, but there could be some chat about manic aggression if Ireland can get over Wales and Scotland in the coming weeks.

"No big speeches yet," he remarks, "but I think he may be saving that for England, on Paddy's Day!" 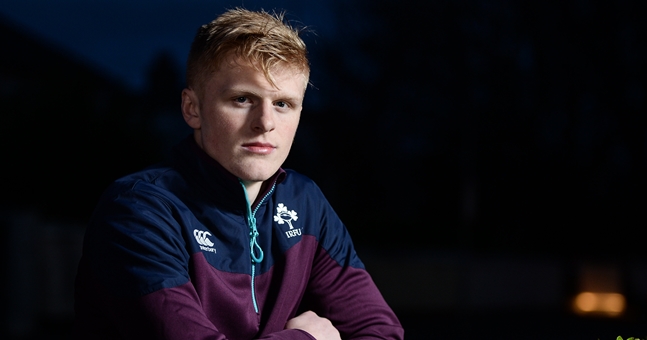 END_OF_DOCUMENT_TOKEN_TO_BE_REPLACED

The former Blackrock College player played with the U20s as an 18-year-old, last year. Back for his second spin, Noel McNamara chose him to captain this year's crop.

When it comes to addressing this Ireland team, the Leinster back - starting on the wing against Wales - got some good advice from O'Connell.

"Yeah, it's tough. I was talking to Paul about it as well, because he was such a fantastic captain. He gave me some great tips, like, there are a few times when you need to stand up and say what you feel. But, mostly, a captain should be a leader by example. Whether that is on the pitch or in training - try lead by example."

He has certainly done that so far in the 2018 championship, which has included a high-scoring loss against France and win over Italy. To make most rugby fans feel old, O'Brien shares with us some of his earliest rugby memories.

"Johnny Sexton would be one of the guys I'd have looked up to," he says.

"I think it was my younger sister's confirmation, or communion, and we watching Leinster coming back to beat Northampton. You'd idolise these guys, so it is fantastic to get out there and share a pitch with these lads.

"I'd say that'd be close [to being my earliest memory]. I wouldn't say the earliest as I was 13 or so. That really stands out for me - that belief of being proud of being from Leinster and proud of being from Ireland. That game and the Grand Slam, with Ronan O'Gara getting the drop goal."


popular
Solskjaer gamble on Harry Maguire backfires in most horrendous way
WATCH: Munster fans in Paris pay tribute to Anthony Foley with spine-tingling Fields of Athenry rendition
José Mourinho swaps Conor McGregor a Roma jersey for some whiskey
GAA at its best as Bellaghy players run into team-mate who buried his father that morning
Alex Ferguson wrote Mickey Harte a letter - ex Tyrone boss reveals in new memoir
"I'll go back running the roads now and make sure my body doesn't get lazy"
Jeff Stelling loses it during Soccer Saturday after Brighton was denied a blatant penalty
You may also like
7 hours ago
Caoimhín Kelleher could carve out a career at Liverpool
3 days ago
Full player ratings as feel-good Ireland give Qatar a throttling
4 days ago
Ireland manager Stephen Kenny admits that "60 to 70% of our best players are defenders"
6 days ago
Callum Robinson performance shows Ireland what could have been
1 week ago
Player ratings as Callum Robinson's double wins it for Ireland
1 week ago
Two Irish prospects feature in The Guardian's top 20 Premier League best talents
Next Page