Brian O'Driscoll was on his third British & Irish Lions tour, and would go on to form a brilliant midfield partnership with Jamie Roberts.

Tom Croft was not part of the original Lions squad, in 2009. He only made it as a call-up when Alan Quinlan was suspended for a Heineken Cup run-in with Leo Cullen.

END_OF_DOCUMENT_TOKEN_TO_BE_REPLACED

Once he was in South Africa, he was an outside shout for the Test Series. Stephen Ferris looked nailed on for the No.6 jersey. When the Ulster flanker got injured in training, the Lions then flew out Ryan Jones, who had been concussed twice while on summer Test duty for Wales. Jones got off the plane, took a medical the next day and was not cleared to play on the tour.

And so, Croft got the No.6 jersey. He may not have been the first choice, but he damn well played like it. He scored two tries in the First Test, played another blinder in the second and came off the bench in the third. Such was his tour form, and November internationals run, that he ended up getting nominated for World Rugby Player of the Year.

Another Lions player that got a nomination, that year, was Brian O'Driscoll. On the latest episode of House of Rugby's Lions Series [LISTEN from 2:30 below], Croft spoke with Sean O'Brien and Alex Goode about the 2009 tour, and his reverence 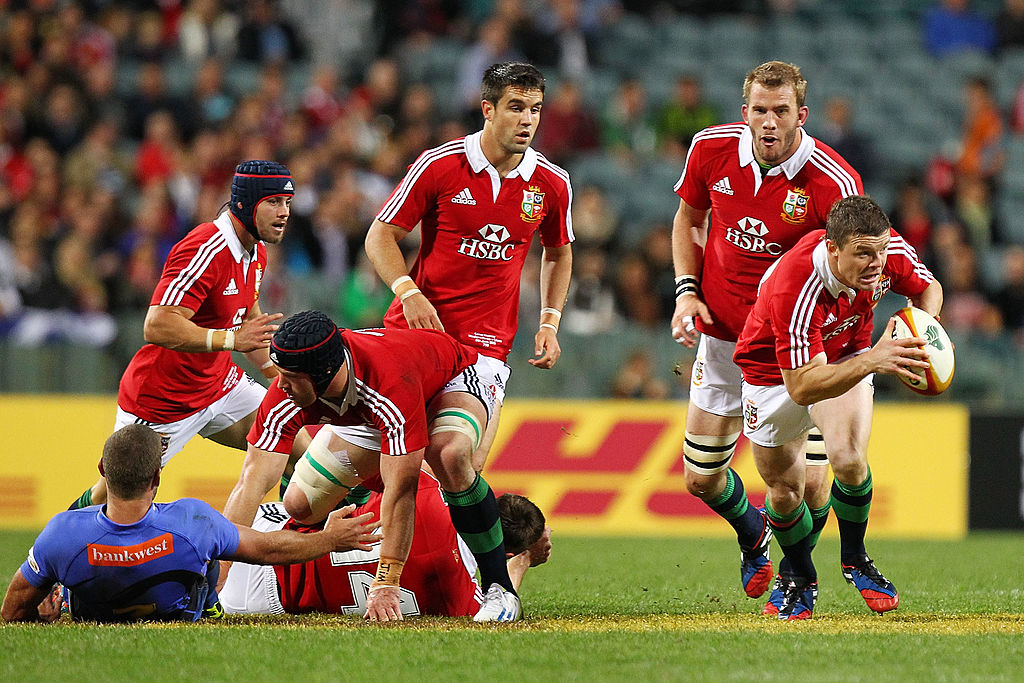 Watched on by Conor Murray and Tom Croft, on the 2013 Lions Tour, Brian O'Driscoll makes a break. (Photo by Will Russell/Getty Images for HSBC)

Croft had only made his England debut 15 months before he was called into the Lions squad. He says it was slightly surreal to be playing with so many players he had grown up watching on TV.

"I was only 23 and, for me, it was proper rabbit in the headlights.

"I was surrounded by guys who, when I was coming up through school, I was watching play. I was pretty timid and probably scared of messing up. I didn't want to let the team down.

"Being selected for that first Test match, I was proper s****ing myself."

END_OF_DOCUMENT_TOKEN_TO_BE_REPLACED

Modest about his try-scoring brace, he says he probably only totalled 10 running metres for them both and gives most of the credit to creators Brian O'Driscoll and Jamie 'Doc' Roberts.

It was some turn of events for someone who had discovered in training, the week of the Heineken Cup Final [against Leinster], that he had not made the original squad. O'Driscoll and Leinster beat him to European glory, that day, but they would be teaming up for Lions tries.

Asked by Sean O'Brien, who he toured to Australia with in 2013, who he clicked well with from the 2009 Lions squad, you can tell the reverence he, and others, had for O'Driscoll.

"To be fair, myself and Harry Ellis went off and played Scrabble most evenings

"I was 23-years-old and I was scared of everyone. I wasn't going up to Mr O'Driscoll and asking him to play Scrabble, was I?! So I was stuck with Harry."

O'Driscoll had just turned 30 but he had already been on the Test rugby scene for a decade. His stunning breakaway try against the Wallabies on the 2001 tour had already vaulted him to world super-stardom, and it is fascinating to hear how some of the England players held him in such high regard.

Mr O'Driscoll. One of the guys, but operating at another level.

Speaking of which, it was Richie McCaw that beat Croft and O'Driscoll to the World Rugby Player of the Year award in 2009. Another steal from the master poacher.


popular
Roy Keane's issue with Argentina star could rival Graeme Souness and Paul PogbaA~WQA~~~~~~AAAA
Lionel Messi makes Gary Neville eat his words after "silk pyjamas" comment
Roy Keane cracked up Ian Wright and Gary Neville with England team spirit remark
Roy Keane takes moment on TV to pay tribute to his old team in Cork
Roy Keane shoots down ITV presenter's 'excuse' for England's draw with USA
'I was so stressed the week before the All-Ireland and I ended up having a panic-attack' - O'Shea and O'Sullivan open up
Ronaldo finally reveals why he got that hideous haircut
You may also like
5 days ago
"Two Irish players are best in the world" - Rugby reacts to big Josh van der Flier and Terry Kennedy awards
6 days ago
Two baffling omissions as four Ireland stars make World Rugby 'Dream Team' of the Year
6 days ago
Josh van der Flier claims World Rugby Player of the Year at Monaco ceremony
6 days ago
"Highlight of my Ireland career" - Behind the scenes as Jack Crowley and Ross Byrne covered for a legend
1 week ago
Bundee Aki reminded us all of his best qualities, on a night Ireland couldn't do without him
1 week ago
Peter O'Mahony delivered some fitting Jack Crowley comments after surprise Test start
Next Page