Ben Healy has Rolex wrists and eyes on the back of his head.

24-0 up and cruising towards a bonus point, Ben Healy sniffed out an opportunity. The phases were threatening to build around the try-line, Ireland wanted to put it to bed before half-time.

Not a bother on him. Healy imporvised cleverly to take the slightly misdirected pass, taking it on his outside before flinging it through the arms and out the wrong side. A piece of North Tipperary magic. Russell ran it over.

Watch the reverse pass in all its glory here.

Ben Healy from Tipperary with the magic for the Ireland under-20s...

Russell's try would help Ireland to a convincing 38-14 bonus point victory over the Italians in their final group game though they would narrowly miss out on qualification for the semi-finals of the tournament.

As despite the bonus point, Noel McNamara's side's unfortunate loss against Australia proved costly with the Aussies as well as France, South Africa and Argentina all finishing with more points than them and qualifying for the last four.

This Irish team can hold their heads high though. And rugby fans can be safe in the knowledge that there are plenty of good things coming down the tracks with the team having played some splendid rugby out in Argentina. 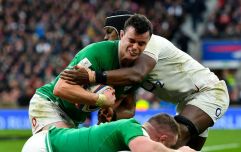 END_OF_DOCUMENT_TOKEN_TO_BE_REPLACED

Next up is England or Wales in the fifth place play-off where they will look to build on their strong Pool stage showing.

That splendid rugby we talk about was stamped all over that first half in Santa Fe. Birr man Michael Milne grounded for the first try but their score of the tournament came a while later when some tremendous hands set up centre Cormac Foley for the finish.

Ireland beat Italy 38-14 but miss out on the semi-finals narrowly.

They played some gorgeous rugby along the way though and gave the country plenty to shout aboutpic.twitter.com/g24nZRhju6

There are good things coming!


popular
The SportsJOE 12 o'clock quiz | Day 136
The daily diet of Manchester United midfielder Jesse Lingard
James Ryan's misfortune opens Leinster and Ireland doors for Ryan Baird
The diet of a modern day rugby player compared with a top jockey
COMPETITION: Answer this survey for a chance to win a fabulous stay at the Trident Hotel in Kinsale
Jadon Sancho to earn eye-watering salary at Manchester United
"It's not about winning at underage. It's about building players and building people"
You may also like
5 months ago
"If Murray is playing that first half for England, he's probably Man of the Match"
5 months ago
Ireland lose mental battle, as scars of 2019 rear their head again
5 months ago
Romain Poite "brilliant to deal with" - Sexton
6 months ago
Player ratings as Ireland squeak past Scotland
6 months ago
Two debutants and some shocks as Farrell names Ireland team
9 months ago
Ireland went back to "tried and trusted" - Isa Nacewa
Next Page