Swansea City could do a lot worse than signing up Welsh rugby star Justin Tipuric, judging by this try

He's beginning to make a habit out of scoring ridiculously good tries.

Justin Tipuric is having a stellar season.

The 27-year-old has been in flying form for both Ospreys and Wales and is also the owner of some ridiculous tackling statistics so far this season.

Last week we revealed that Tipuric had made an astonishing 160 successful tackles in a row which consisted of 109 tackles in this season's Guinness Pro12.

In fact, the Welshman has not missed a tackle since last year's Six Nations tournament.

How is this even possible? https://t.co/aYzJI5yTMp 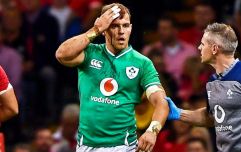 END_OF_DOCUMENT_TOKEN_TO_BE_REPLACED

Well just to add more to the outrageous talent that Tipuric possesses in the defensive department, he scored an absolute belter of a try in the Ospreys' trouncing of Lyon over the weekend.

The Ospreys ran out 47-7 winners and secured their passage into the Challenge Cup quarter-finals in the process.

Tipuric scored a try on 55 minutes and it is already doing the rounds on social media thanks to the excellent footballing skills the openside displayed. 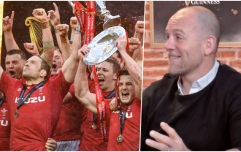 END_OF_DOCUMENT_TOKEN_TO_BE_REPLACED

The ball becomes loose and is kicked forward by an Ospreys player.

The back-row puts on the afterburners to chase after the bouncing ball and shows some incredible deft touches which his fellow countrymen over in Cardiff City Stadium would no doubt appreciate.

The game just so happened to take place in the Liberty Stadium, home of Premier League outfit, Swansea City.

With the Swans in desperate need of a boost at the moment, surely they wouldn't need to look further than Tipuric, we definitely think he could do a job.

Ospreys player Justin Tipuric has some impressive dribbling skills so in that case sign him up. Announce Tipuric @SwansOfficial

Tipuric dribbles the ball in for a score, Swansea city could do with a player like that.


popular
Brazil star responds after Roy Keane slates dancing celebrations
Roy Keane reacts to Brazil's jubilant celebrations in first half demolition job
Roy Keane handled Gary Neville’s goal celebration as most Irish fans would
World Cup 2022 Day 16: All the major action and talking points
Didi Hamann thought Brazil substitution was "disrespectful" to South Korea
Rory McIlroy explains 'falling out' with Shane Lowry that lasted a few years
Portugal boss could strip Cristiano Ronaldo of captaincy
You may also like
3 years ago
Full, brutal Ireland player ratings as Wales cruise to Grand Slam win
3 years ago
'GAA was a sport I knew very little about, but I knew the people that played it were f***ing nuts'
3 years ago
Two changes Ireland should make for all out war with Wales
4 years ago
Johnny Sexton's reaction to adversity knows no earthly bounds
4 years ago
Referee microphone picked up CJ Stander comments as Jacob Stockdale clinched Ireland's victory
4 years ago
Warren Gatland couldn't resist himself in Wales' post-match press conference
Next Page