Why Stuart McCloskey should have been included in the Ireland squad

Ulster Rugby uploaded a 17 minute video of every try they scored from the 2018/19 season on Tuesday.

This video is just further criticism of Schmidt's decision to omit McCloskey from the Irish squad. "One trick pony", my backside.

With a name like UlsterSUFTUM it's not entirely surprising that the YouTube user thinks that one of the province's players has been overlooked for the national team but they're not alone in that view.

Interesting stats on @Stuart_Mc12
Worth a read for those who think he should or shouldn’t be involved in the @IrishRugby World Cup squad https://t.co/4d9oLxRcu7 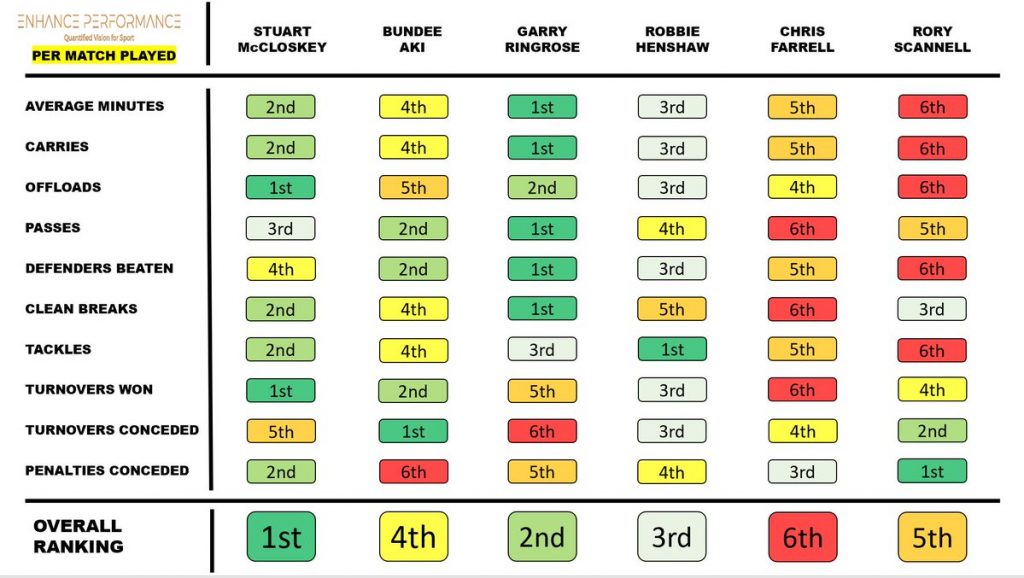 McCloskey can't be entirely surprised of his omission given that he's been capped by Schmidt just three times over the last four years but on the evidence of this season you can make a pretty compelling case that he deserved at least a call-up to the training squad.

His numbers are pretty eye popping.

He averaged 3.76 metres per carry this season, more than Ringrose, Henshaw and Aki.

He averaged 10.66 tackles per game, more than all three players. He beat 2.59 defenders per game, level with Henshaw.

McCloskey was right there statistically with Ireland's primary trio of centres but one statistic jumps out above the rest. Offloads.

McCloskey averaged 1.4 offloads per game compared to Ringrose (0.74), Henshaw (0.75) and Aki (Connacht statistics weren't available but he had just one offload in 331 minutes during the Six Nations).

McCloskey's offloading skills were a huge advantage for Ulster this season and Dan McFarland made him a big focal point of the club's attack with no other Ulster player carrying the ball more than the Bangor native in the PRO14 this season.

You can see why too.

The 26-year-old takes the ball into contact but often does an outstanding job of freeing his hands and making sure that his support runner can take the offload if it's there to give.

Whether it's palming the ball off with one hand or scooping it out the back, McCloskey has proven over the last few seasons that he can create try scoring opportunities for his teammates with his ability to extend the play.

It's an important part of his game, and crucially, maybe even more important to Ireland given the fact that the national team were ranked last in the Six Nations for offloads with just 15 offloads in five games.

For some context, Grand Slam champions Wales had 30 offloads which ranked them fifth while France led the championship with 60 offloads.

When you couple Ireland's low offload count with the fact that the team ranked fifth for metres gained, despite having the most carries in the tournament, it makes McCloskey's omission all the more glaring.

The counter argument to that is they still scored 14 tries, joint second with Scotland, but when the pressure was turned up against them in the England and Wales defeats, they didn't have another option.

When you dissect both losses there's some interesting parallels. Ireland have 60% possession in both games. They equal their opposition in clean breaks in each game (6 v England, 3 v Wales). They beat more defenders in each game (28-13, 11-8). But crucially they score three tries and concede five over both games.

Numbers don't tell everything, for instance, if you concede 20 turnovers and Wales only concede eight, or if England kick you off the park through identifying pockets of space near touch, you're going to struggle to win regardless of how your attack or defence looks, but the fact that Ireland had the most carries in the Six Nations, yet the least amount of offloads and the second least amount of metres, tells you a lot about their playing style. They want to control the ball and suffocate the opposition out of the game.

"With Munster, I’m free to try things, to play the moves that I see. I don’t have any shackles.

"Joe is a super coach who has had great success with Ireland. We already talked about it face-to-face. I said to him that I couldn’t play in such a rigid structure. I can’t play like that."

Former Leinster fly-half Andy Dunne said in March that the Irish coaches are far too oppressive, and far too dictatorial about the style of play and Schmidt has generally dismissed criticism of the aesthetics of Ireland's brand of rugby as a need for others to pay more attention.

"I'd wish people would do more homework," he said last year.

"We had some really good stuff that went down the middle against Wales but we had some good stuff on the edges with some of the best passes you will see in world rugby.

"We need to keep that variety, we have made the third-most offloads and that's an area where people have beaten us with a stick. So we have more variety and we will need that balance this weekend."

Schmidt is clearly conscious of their offloading numbers but it's an area Ireland have regressed horribly in this year with half as many as the next lowest team and quarter as many offloads as the championship leaders.

McCloskey would certainly improve matters here but as UlsterSUFTUM highlighted at the start of this piece he has been branded as a one-trick pony. A poor man's Sonny Bill Williams if you will.

McCloskey has proven this season more than any other, that that particular tag is no longer valid.

He's been more than adept at stepping into the line this season and showing soft hands that has attracted the opposition's defence and directly led to scores.

Here against Leinster he takes the ball to the line and shows soft hands to make the defence bite as Luke Marshall takes advantage of the space created to cross and score.

Similarly, against Racing earlier on in their Champions Cup run, McCloskey attracts the defence and times his pass just right to allow Will Addison the space to get on the outside and once he's there Ulster are off to the races.

Schmidt has overwhelmingly favoured some combination of Henshaw, Aki and Ringrose over the last few seasons and with three Six Nations titles in five years it's hard to really pick too many holes in his logic.

But if those three are all but assured a seat on the plane to Japan barring injury, and it's a fight between Farrell and Scannell for that last centre spot, why not pick McCloskey as an alternative.

Farrell and Scannell register as fifth and sixth respectively for offloads made and it's an area that McCloskey thrives in while Ireland have clearly struggled in this year.

The old adage goes if it's not broke don't fix it, and that's certainly been the case with Ireland under Schmidt, but it would be handy having a different set of tyres in Japan if it begins to look like Ireland's World Cup dream is in danger of being run off the tracks.


popular
SportsJOE 2000s Football Quiz | Round 1
The SportsJOE 12 o'clock quiz | Day 69
QUIZ: Name these footballers based on their former teammates
QUIZ: Name the footballers to have played for Manchester United & Real Madrid
"I went up to the hotel, got attacked in the room and told I'm no longer Tipperary captain"
QUIZ: Name every All-Ireland football winner of the last 33 years?
The SportsJOE 12 o'clock quiz | Day 67
You may also like
4 days ago
'We knew how much it meant to them' - Conrad Smith on Croke Park history lesson
4 days ago
"I was like, 'Your ribs will be broke, alright, if I get my hands on you again!'"
5 days ago
Baz & Andrew's House of Rugby - Mike Brown on past battles with Ireland
5 days ago
Online media excluded from another important IRFU briefing
6 days ago
"Just to clarify, it was an accident" - Mike Brown on Conor Murray incident
1 week ago
QUIZ: Guess the footballer from their Wikipedia page | Irish edition
Next Page