Where do Stuart Hogg and Scotland get off?

So groused Stuart Hogg as he wrapped up another underwhelming Six Nations campaign with his final press commitment. One wondered whether the fullback was referring to the Scotland captaincy or the championship itself.

The 2021 Lions Tour to South Africa was the launchpad, we were told. Buoyed by a record inclusion of players in a professional Lions squad, the Scots spoke of how they were on the up. They had seen how Finn Russell had caused the Springboks some wobbles and convinced themselves that he, Ali Price, Hamish Watson, Duhan van der Merwe & Co. would take the next step.

END_OF_DOCUMENT_TOKEN_TO_BE_REPLACED

Last November, they beat Tonga and Australia and it felt as if they could finally be turning the corner. Scotland could be a competitive, consistent beast. Not everyone was convinced, though. Sean O'Brien was one of them.

"Do you know what I find frustrating about the Scottish team?" he asked.

"They win a turnover in the middle of the field and they're all celebrating and going absolutely crazy. What they need to do is get on with it and focus on the next job. Go and beat these teams, rather than jumping around and shouting at lads... You're looking at them going, 'You haven't won anything major in the last while. Go on to the next job and go win these games'."

END_OF_DOCUMENT_TOKEN_TO_BE_REPLACED

On to the Six Nations and Scotland started off with a home win over England to retain the Calcutta Cup for the first time in 38 years. After the first round of the championship, they were one of three teams still left hunting the Grand Slam.

They arguably played better in their next game, against Wales, but lost that in Cardiff. In the following match, France tore strips off them while Stuart Hogg was left cursing a knock-on after an overly ambitious Chris Harris pass. Championship gone, but a win in Rome over the Italians to ensure mid-table anonymity. There was no trophy up for grabs, in the final game, but they could prove many wrong in their final game against Ireland.

Instead, they proved many right. They scrapped, they really did, but they were completely outclassed. The same could be said for the truculent post-match interviews with Stuart Hogg and head coach Gregor Townsend. 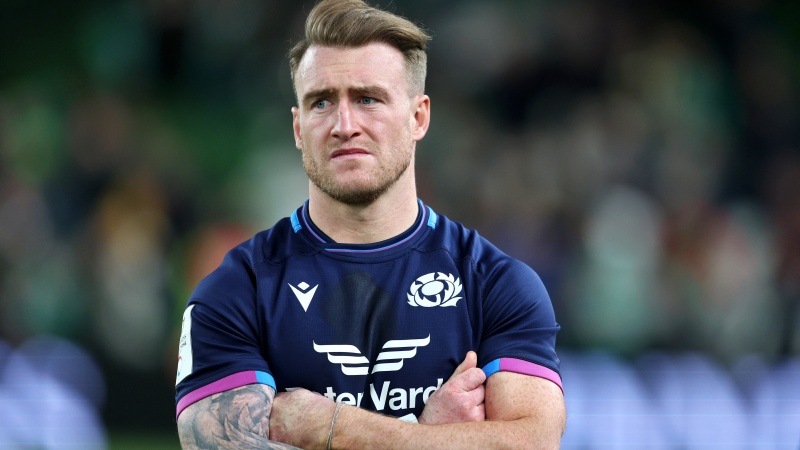 Stuart Hogg of Scotland looks on dejected after his side's 2022 Six Nations loss to Ireland. (Photo by Richard Heathcote/Getty Images)

'I know exactly what you're after here' - Stuart Hogg

END_OF_DOCUMENT_TOKEN_TO_BE_REPLACED

Starting off with the game, the likes of Pierre Schoemann, George Turner, Rory Darge and Hamish Watson all played really well. Ireland were disrupted at the breakdown and their vaunted ruck speed was slowed down.

The Scots forced a heap of turnovers and disrupted the Ireland rolling maul, as well as making big plays inside their red zone that saved lots of points. They were bright in attack in the opening 15 minutes, without scoring, and could have made it 14-12, in the second half, if Hogg had passed to teammate Sam Johnson instead of going hero-ball for the corner.

For all of that, Ireland won with ease, and without being anywhere near their best, or most clinical. Johnny Sexton kept kicking for the corner and the Ireland forwards kept at them inside the 22. Put simply, they fancied their chances. They did not rate Scotland.

And yet, after his side's 26-5 defeat, both Stuart Hogg and Gregor Townsend were insisting this was a week, and a performance, full of positives.

When Scottish reporters tried to point at flaws in their game or in that preparation - six players were disciplined for a breach of team guidelines after a night out in Edinburgh - they were met with sniffs, snorts, sighs and dismissive comments. It was pitiful stuff.

Asked about his crucial decision not to pass inside to an open teammate, before Hugo Keenan bundled him out of play, Hogg replied:

"There was a lot of good stuff that happened in that game but, unfortunately - classic move - we've picked out the negatives to look at, and I'm disappointed by that. If I get down on my belly, I probably score that. On another day, I probably do. And we're looking at five seconds of an 80-minute performance. So, yeah, fair play."

As the captain of Scotland, this was the first press briefing Hogg - one of the six players disciplined - had to answer questions on that matter, and the Edinburgh night out. After making a flat apology and providing no further details on it, Hogg expected the matter to be dropped and got frustrated when there were follow-up questions.

"What's out there is out there," he said, after shaking his head disdainfully.

"I don't know how many times I have to say I've apologised and put my hands up. I made a mistake... I can't sit here and say I'm not disappointed... but I can't go back and change anything. I'm not going to be developing [that story]. I know exactly what you're after here, and you're not going to get it."

His head coach took the seat Hogg had just vacated as the Scotland captain got up, exclaiming he would not miss those sort of post-match Q&As.

Townsend was equally sullen and short on details when he was asked about a big decision to discipline six players, as well as dropping his outhalf [Finn Russell] and the impactful Sione Tuipulotou. Players nipping out for post-match pints is hardly earth-shattering, but the moment the story leaked out, it grew legs. Many that reported on it were just stating the facts, as they had them.

"Things happen," Townsend reflected on his players breaking team "guidelines", before talking of 'learning from it' and lads that 'fronted up'. Again, pressed for more on this exact breach of discipline - to counter or confirm the rumours, hearsay and voice-notes doing the rounds - Townsend was not a happy man.

One Scottish reporter put it well, when he told Townsend that fans of the team, who pay so much to get along to games and support them, deserve to know exactly what is going on.

"We’ve put a statement out already about this," he said. "It's a private matter and private discussions and decisions have been made within the group. Anything on the back of that is just gossip.

"We’ve moved on from that and there’s nothing more to say. Nobody was ejected from the squad. We dealt with it in-house and had our best training week of the championship."

Yes, tell us more about the training.

You wondered, looking on, where these lads get off.

Thick egos. Thin skin. No wonder Ireland fancied it so much.


popular
Cristiano Ronaldo 'agrees £173m-a-year deal' with Saudi club
Castleknock's Warnock the hero as Maynooth win first ever Ryan Cup final
Damien Duff makes 'brutally honest' England World Cup prediction after Wales win
"Nowadays, even if I don't hit a ball, I don't care as long as we win" - Gleeson learning from the past
World Cup 2022 Day 11: All the major action and talking points
Argentina reach World Cup last-16 with convincing win over Poland
Thibaut Courtois warns teammates after leaks emerge from Belgium camp
You may also like
5 days ago
Former England international admits he wishes he had played for Ireland
1 week ago
Two baffling omissions as four Ireland stars make World Rugby 'Dream Team' of the Year
1 week ago
Josh van der Flier claims World Rugby Player of the Year at Monaco ceremony
1 week ago
"Highlight of my Ireland career" - Behind the scenes as Jack Crowley and Ross Byrne covered for a legend
1 week ago
Bundee Aki reminded us all of his best qualities, on a night Ireland couldn't do without him
1 week ago
Peter O'Mahony delivered some fitting Jack Crowley comments after surprise Test start
Next Page