"He was different gravy."

Stewart Moore has been working for what's to come since he was four years old.

The town of Ballymoney, like so many other towns across this island, fell silent for much of March, April and May. John Waide, like so many of us, restricted his trips out of the house for shopping or for a daily dose of exercise.

"It was like a ghost-town," he tells us. "Probably that’s one thing I do see, each day, is Stewart.

"I go up to the club – that’s where I walk to every day – and during this lockdown I’d see Stewart out training. He’d be training nearly every day up there before Ulster get back into their own training routine."

To the people of Ballymoney, and those that know the rugby club, that is a familiar sight. Moore is 20 now, but he has been playing at the club since he was four and around the place from even earlier. His father, Sam, is a club stalwart and now serves as vice president on the board.

Not content with keeping up his fitness, and sharpness, Moore also hopped into a tractor and helped re-seed the main pitch during the lockdown period. Whenever club rugby is back, the pitch should be in good nick, all thanks to Ulster Rugby's hottest prospect in the last few years.

Stewart Moore gets the ball away on his senior debut for Ulster, in December 2019. (Credit:SPORTSFILE)

END_OF_DOCUMENT_TOKEN_TO_BE_REPLACED

We says 'few years' because Ulster Rugby is doing okay for itself, of late. Mike Lowry and Robert Baloucoune have emerged as top backline options in the past couple of seasons and you sometimes forget Jacob Stockdale - a world-class and last red-hot prospect - is only 24, and still developing.

Moore is highly-rated, in both the Ulster and Ireland set-ups. Dan McFarland's side securing a three-year senior contract for him will tell you exactly how far his province and union think he can go. Even Stockdale himself has been raving about the young centre.

"Yeah, wee Stew is a serious talent. Like, he’s one of those players where everything seems to come naturally for him. Really good passer, kicker, good feet. You know, he’s a very, very talented all-rounder."

As a senior Ireland international, Stockdale was spared the late December trip to a frigid RDS when Ulster and Leinster both gave a number of youngsters a run-out. Stockdale smiles when Andrew Trimble, his former teammate, spoke about the 'most ridiculous offload' Moore pulled off during that Guinness PRO14 encounter.

Coach: Right lad, it's your first cap. Just keep it nice and simple.

"Supposedly now," Stockdale begins. "I wasn’t there, but apparently before he was going on, Dwayne Peel and the message he sent down was, ‘Keep it in the hands. Safe. No offloads’. And his first touch, Stew pulls that out of his arse. Yeah, he’s a seriously talented wee man!"

Those that know Moore know all about those offloads. Waide, who is now club president of Ballymoney RFC, coached him when he played mini rugby.

"Stewart only lives probably a quarter mile away from the rugby club," says Waide. "He started very early in his career; probably started two years before he was meant to join the mini rugby. I think he was only four or five when he started, but he was very, very, very keen. You could see from an early age that he was a special talent, and he was going to be a special talent. Because the skills that he had, you just knew there was something special about him. He was different gravy.

"He had a great awareness of space. Probably in minis, it’s a bit like sheep. Where one goes, they all go. But you could see that he was totally different. He looked for the space."

Moore's father was part of the fabric of the club and his grandfather had rugby in his genes too, playing with a handy Coventry team over in England during the 1960s.

The North Antrim club has been going since 1952 and proudly boasts that it can field four senior adult team. Waide started off with the First XV over 35 years ago and did two decades with them before playing seconds, thirds and finishing out with the 'Golden Oldies' in the fourth team. When they stopped counting, he had made 767 club appearances.

As a junior club, the progression for talented Ballymoney players is often lining out for AIL side Ballymena. That was the fate of David Twigg, Martin Irwin and Jason Taggart but Moore has already progressed further. James McCormick is another product of minis rugby with the club and he has just signed an academy contract with Ulster.

Waide, along with the likes of John Cameron and David Anderson, coached Moore and a talented crop of youngsters that went on to produce players that lined out for Ulster Schools sides. He played some junior football with Coleraine but sided with rugby when it came to deciding on what sporting route to commit to.

Moore played a bit of fullback and outhalf, during his formative years, but found a home for himself in midfield, for his club and school (Dalriada). He was playing with the First XV by 16 and Ulster had offered him an academy deal when he was only 17. By 19, he was scoring a clued-in try against England at the World Rugby U20 Championships and scorching the Australian defence.

END_OF_DOCUMENT_TOKEN_TO_BE_REPLACED

Moore injured himself during that tournament, holding him back from senior duties a while but, as soon as he was fully fit, McFarland, Dwayne Peel and the other coaches simply had to have a look.

Trailing 33-14 at half-time, McFarland gave four academy players - Moore, Ethan McIlroy, Azur Allison and Jack Regan - a run and the second-half was as entertaining as they come. Leinster ended up winning out 54-42 and both Moore and McIlroy had bolted their hands up.

"That offload he gave in that game, it was unbelievable," says Waide. "I don’t know how he got it away, but that’s the type of player he is." 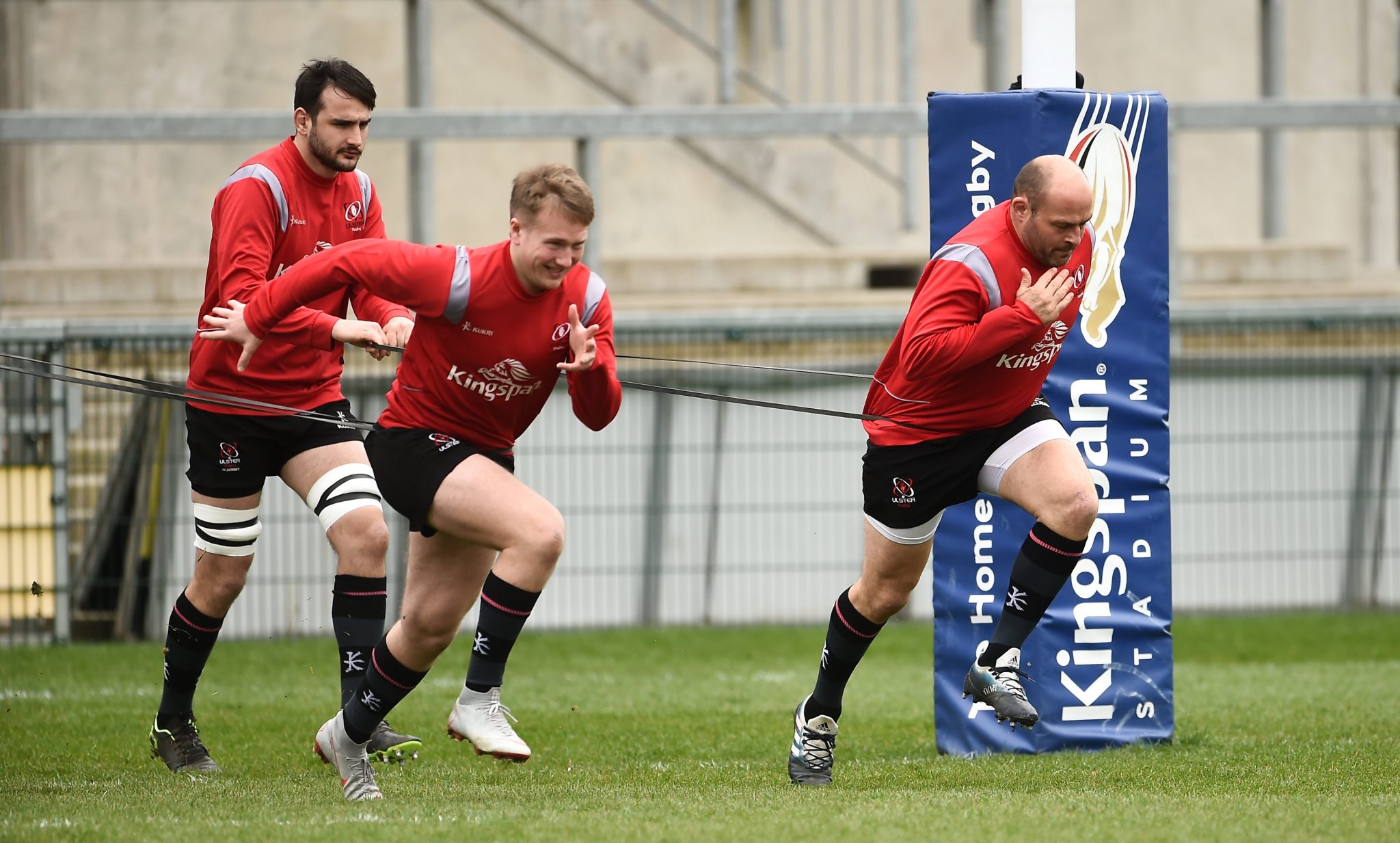 Moore has two senior caps and he will hope to add to that tally when Irish rugby returns with these planned inter-provincial games in August. It was at Ballymoney Rugby Club that the young centre set a Bronco [a series of 20-, 40- and 60-metre sprints] time that had the Ulster squad abuzz.

"From what I can gather," says Stockdale, "he’s been working pretty hard over this lockdown period. He ran a 4:25 bronco, there, which is quick, for a centre especially.

"It was second only to Shanners (Dave Shanahan). But he’s right up there in terms of his fitness, which would probably have been one of his weaker areas, earlier on in his career. So he’s really shaping himself up to be a very talented player and there’s no doubt that he’ll get plenty of caps for Ulster."

That type of talk from Stockdale, Trimble and others that are tracking Moore closely is something that lifts Waide's spirits no end.

"He’s a great affinity with the club. He presented his Irish Schools shirt to the club, a couple of years back, so we’re fairly hopeful for him that he’s going to progress even further."

"There’s always a strong contingent goes up from Ballymoney to watch the Ulster games," he adds, "and obviously when Stewart gets playing, it’d be great to see him play for Ulster."

Ospreys and Wales legend James Hook joins Barry Murphy and Andrew Trimble for the latest House of Rugby episode. Having retired last week, James looks back on his successful rugby career and talks about the switching to coaching, and writing children's books.


popular
How many of the 49 Premier League clubs can you name?
The SportsJOE 12 o'clock quiz | Day 115
SportsJOE 2000s Football Quiz | Round 10
QUIZ: See if you can identify these retro football kit sponsors
QUIZ: Can you name the first professional teams of these footballers?
Roy Keane on the experience of being managed by Jack Charlton at USA 94
Jack Charlton's role in getting Roy Keane to Manchester United has been revealed

You may also like
21 hours ago
James McClean opens up on sickening, Covid-related hate mail
3 days ago
When the President interrupted a Euro 88 pint between Charlton and Dunphy
3 days ago
How an uncultured Englishman conquered Ireland's sporting heart
3 days ago
The SportsJOE 12 o'clock quiz | Jack Charlton special (Day 112)
3 days ago
Growing up in the shadow of Jack Charlton's Ireland
6 days ago
"It's too experimental" - Kenny's team for Slovakia showdown begins to take shape
Next Page