A smack of looming reality to snap us out of our All Blacks-slaying euphoria.

Steve Hansen and Joe Schmidt have great respect for each other. They may have faced off four times as rival international coaches - winning two apiece - but they are mutual fans of the other's work.

Ahead of Ireland's 16-9 win over Hansen's New Zealand, 'Shag' sought out Schmidt for a handshake, and to deliver him what looked to be a note. Turns out, it was an envelope. Following the game, Hansen said:

"No, no, not really. But it was €760 because I bought some tickets, and he was the only bloke I could get some tickets off! When you buy them, you have to pay for them. So I thought, 'Well, I'll get it out of the way early'." 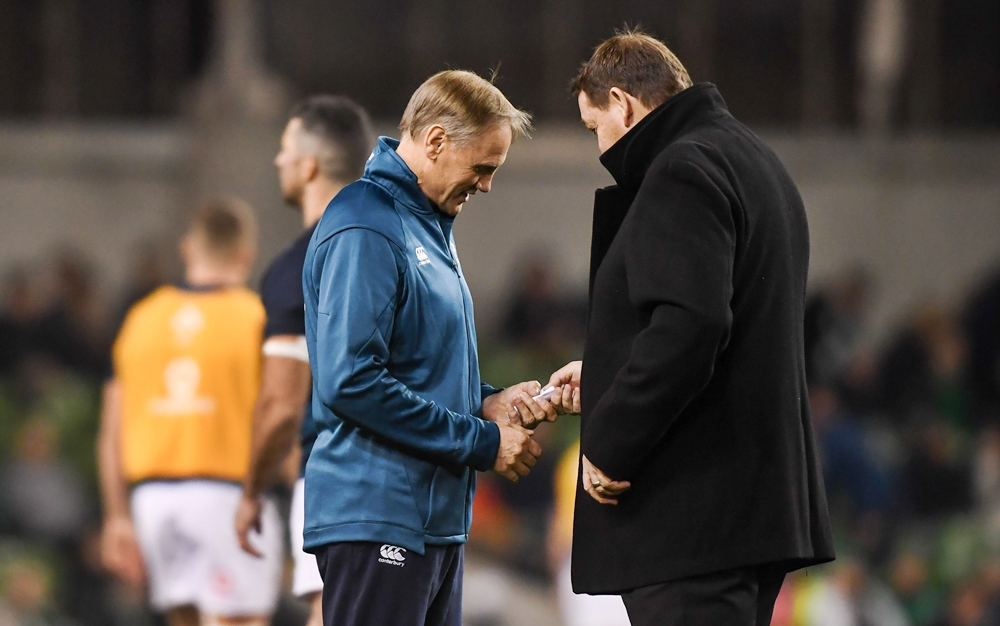 As for Schmidt's own coaching ticket, and whether the latest All Blacks win he masterminded could land him the New Zealand job, Hansen commented:

"Obviously, he's a good coach. The one thing I do know about being the head coach is, if you win you get all the credit and if you lose you get smacked a bit.

"But you don't do it unless you've got a great team around you. While Joe deserves the credit, so do the others in his coaching group."

Hansen went on to shower praise on the likes of Andy Farrell, Simon Easterby and 'another Kiwi they've got', scrum coach Greg Feek.

Steve Hansen says he didn't hand Joe Schmidt a note before he game... but doled over €760 for some match tickets Schmidt sorted for him pic.twitter.com/quWXw4doB4

Before New Zealand flew out to Rome, for their final tour match against Italy, however, Hansen made a comment that will set alarm bells ringing here.

Asked if Schmidt would be favourite to succeed him for the All Blacks job, Hansen told reporters:

"We’re all going to be making an announcement shortly. I decided before I left [New Zealand] that I was going to make an announcement, and I’ll do that before Christmas at some stage."

Schmidt, himself, has already confirmed that he will announce his future intentions at the end of the Guinness Series.

Although he got his Irish citizenship four years ago, and has been living here since 2010, there is a fear that Schmidt could feel that the time will be right to move back to his home-land after the 2019 World Cup.

That decision is coming on faster than a fired-up Irish defensive line.


popular
Here's all the GAA games on the tube this weekend as the provincial championship heats up
GAA club transfers that shocked the county: Jason Sherlock
Red cards, slips, heroes, villains and last second equalisers - Derrygonnelly's extra time win over Dromore had it all
Fermanagh footballer opens up about losing her mum to suicide and urges people to seek counselling
Jordan Larmour enjoys satisfying bit of revenge on Mack Hansen
Ronnie O'Sullivan on why he staged sit-down protest during UK Championship defeat
Ruesha Littlejohn gate-crashes Katie McCabe's interview after another player-of-the-match display
You may also like
1 week ago
"I've had stick my whole career" - Mike McCarthy on 'Plastic Paddy' jibes and singing the anthem
1 week ago
"Just brilliant" - Alex Goode backs Caelan Doris for 'Best Player' award
1 week ago
Sean O'Brien praises "unbelievable" Robbie Henshaw after his winning return
1 week ago
Four Ireland stars voted onto Autumn Nations Series 'Best XV'
1 week ago
Sean O'Brien on rugby league star he'd love to get in a boxing ring against
1 week ago
Joey Carbery puts himself in position to end odd Six Nations streak
Next Page