"I don't know if it's a controversial viewpoint... "

Darren Cave was sticking his neck out, somewhat, when he said he expected more from a Stephen Larkham coached Munster side. Given the reputation Larkham brought with him to Munster, though, he made a couple of valid points.

It was confirmed, late last month, that the former Wallabies star would be leaving Munster at the end of this season. News soon followed that Larkham would be taking over as Brumbies head coach from 2023.

"For now," Larkham stated, "my focus is very much with Munster Rugby and with a long season ahead I will savour every moment of working within this great environment as we continue to build in the right direction."

On the latest House of Rugby URC episode [LISTEN from 26:30 below], Cave gave his take on how Munster's attack has fared under Larkham since he arrived in 2019. 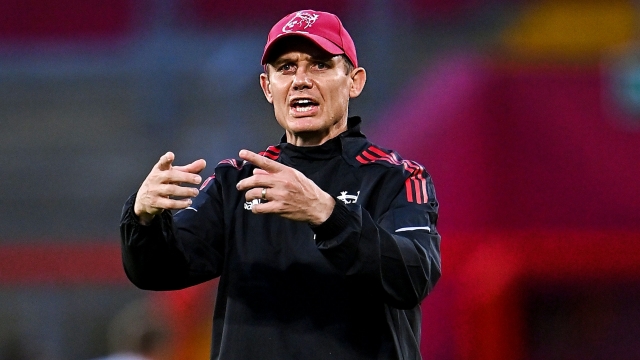 END_OF_DOCUMENT_TOKEN_TO_BE_REPLACED

Capped 102 times for, and a World Cup with, the Wallabies, Stephen Larkham started his coaching career with the Brumbies in 2011. He took over as head coach of the Canberra side in 2014 and found time as Australia's attack coach from 2015 to 2019.

He took up the senior coach position with Munster in 2019 and took a big responsibility for shaping the province's attack shape and set-plays. Munster showed signs of promise but could not derail the Leinster juggernaut, losing a league semi-final and final in Larkham's first two seasons as senior coach. They failed to make the Champions Cup knock-out stages in 2020, but progressed to the Round of 16, last year.

"I don't know if it's a controversial viewpoint," Darren Cave began, "but I haven't been overly impressed with his [tenure] at Munster.

"When he signed, I was like, 'Woah'. That's a guy who you used to get up and watch in Super 12 rugby, and that great Brumbies team he was part of. I was thinking, 'Their attack is going to be unbelievable'.

"Now, I think their attack has been okay but, from the outside, I would say that his impact on Munster Rugby has been pretty underwhelming."

Hosts Greg O'Shea and Jason Hennessy, who both hail from Munster, found it hard to disagree with Cave's general sentiment on Larkham.

"You'd know better than me, Darren," O'Shea said, "but for a new coach to come in and introduce new systems, it takes a couple of seasons for that to get adopted by the players."

"These things take time, as you said," Cave conceded, "and maybe I had an unrealistic expectation of what he was going to come in and do. I just remember that he was a player from that 90s and 2000s era that was so exciting.

"I remember being in with Ireland and Leinster had a play called 'Brumbies'. Alan Gaffney had it with Leinster then it came in as an Ireland play. It was a tip of the cap to how innovative that team was, with George Gregan, Larkham, Joe Roff, Stirling Mortlock and those sort of guys.

"For the guy that was the brains of that Brumbies team to come over to Munster, if I was a fan I would have been buzzing. They've been grand, but I expected better than grand."

Larkham still has the remainder of the season to help Munster to some silverware, their first since 2011. If he can leave, not long after a trophy is held aloft by a Munster captain, he may be remembered more fondly yet.


popular
Mario Balotelli, Luis Suarez, Fernando Torres and why Rio Ferdinand "hated them"
"I remember just hugging this Irish guy" - How one Kiwi rugby star reacted to Ireland's historic series win
"I don’t trust you" - Joey Barton delivers brutal dismissal of Irish defender
Down county football is in tatters, but Conor Laverty is the man to piece it back together
"I'll ask for everyone that comes to the game to wear purple and roots for us" - Pat Fitzgerald
Gatecrashed interviews and chip-shop previews - Wexford GAA's online coverage sets the standard
Javier Hernandez offers to play for Manchester United for free
You may also like
2 days ago
"Everything’s done for you" - Eddie Jones on how private schools influence English rugby
4 days ago
Faf de Klerk knocked out after horror collision with knee of All Blacks winger Caleb Clarke
4 days ago
"We'll support him in any way we can" - Wallabies captain Michael Hooper backed for brave mental health decision
1 week ago
At a time when rugby needs genuine characters, Naitoa Ah Kuoi could not have timed it better
1 week ago
Eight Ireland players make final cut in 'World Class' 33-man squad selection
2 weeks ago
"There's no magic wand. A lot of it starts and finishes with hard work" - Ronan O'Gara
Next Page