386 days had passed since Rory Best's last win in an Ulster jersey.

Best's last victory for the province came against Connacht back in December 2016, a 23-7 victory in the PRO 14, before his next nine starts all resulted in winless ventures for Ulster.

An array of injuries, the Six Nations and the November internationals, and the IRFU's rotation policy, as well as a late return from the Lions tour, had limited Best to just eight appearances for Ulster last year, but still, 13 months had past since his last win in white.

The Ireland captain finally broke the streak on Saturday when Ulster defeated Pool leaders La Rochelle 20-13 at the Kingspan Stadium. 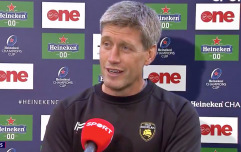 END_OF_DOCUMENT_TOKEN_TO_BE_REPLACED

Best opened the scoring in the 28th minute with a try off the back of a maul, before Jacob Stockdale touched down a shortwhile later, and afterwards Best admitted that the winless streak had dawned on him over the last year.

"You lie to everyone and you say 'oh it doesn't matter' and 'oh it will come next week'," said Best in his post-match interview on Sky Sports.

"I was starting to get a little bit worried that maybe I was the issue but it isn't about me, but it is lovely to win again in a jersey that means so much to me."

The 35-year-old hooker won two crucial turnovers, landed six tackles, was solid in his lineout throwing and a pure menace at the breakdown.

With a trip to Wasps up next weekend, and a visit to Paris just around the corner for Ireland's Six Nations opener against France next month, the evergreen rake shows no signs of letting up.